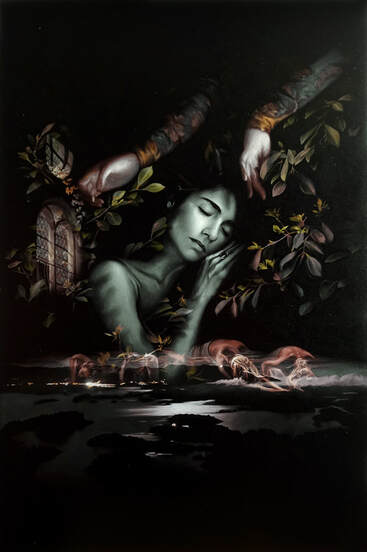 I Call Every New Leaf on My Lemon Tree “Grandpa”, by Kate Wright

spend my mornings with it, turn

the TV on, throw open the drapes,

and position it just how it likes

in the morning sun.

I drink coffee. It drinks

fancy. When the woman

on TV says something funny

I laugh and my lemon tree

up into its Aquaglobes in agreement.

We’re friends, me and my lemon tree,

and I love to see it flourish,

have been taking pictures

of the tiny new sprigs of green

on its body and sending them

to my human friends. Look,

I gush, look how he’s growing,

as if they care. I touch

the tiniest piece of new-growth

and it breaks off in my hands.

I apologize, promise my lemon tree

next time I will be more

until it’s not so fragile--

it made it through the winter

when my grandfather did not,

know that because his hands

and tended this tree, my tree,

the soil, absorbed by the tree,

in its new life.
Kate Wright received her BA/MA in English from Penn State. She is currently pursuing an MFA in Creative Writing and Environment from Iowa State University. Kate’s work has appeared in or is forthcoming from Rogue Agent, Ghost City Review, Rust + Moth, and elsewhere. Find her on Twitter @KateWrightPoet
​Nam Das (Filipino, b. 1989) creates open-ended visual stories by arranging figurative elements into an assemblage forming a central idea, an idea that plays around Jungian archetypes of the collective unconscious or mythologems observed throughout history. He uses a limited palette of four colors in his oil paintings. Also called the Zorn palette, it's composed of: Titanium White, Cadmium Red, Yellow Ochre and Ivory Black. Nam began working as a full-time painter in 2019.