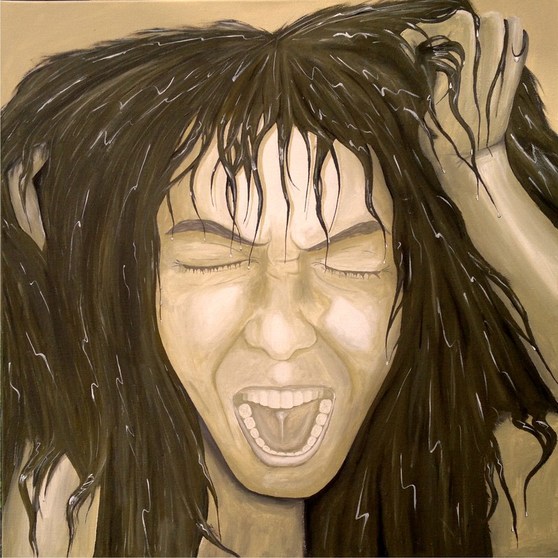 "Schrei" by Jasmin Bauer
Final Purification
​
In solitude a swallowing sound
can be as loud as a symphony
of sirens echoing against
all that has been abandoned.
After disrobing, she wraps
her ashy hair around her neck
like a festive scarf, a loose
noose too nervous to become
a kindling rope, admires her
nipples raising to the draftiness
of December. She wants
past lovers to call upon her
in this moment. For each
to stand in line as if she’s made
of bread and wine, to kiss a cheek,
her hand, peck her dried lips.
For just one to regret not stroking
her stocky legs and pale breasts
one last time. Place my heart
on a pyre and push this burning
part of me out to sea.

She makes a fairly good ghost,
hovering above headboards
at night so that no one ever
feels like she’s gone. Is that you?
they whisper and she rattles
the bed slats, blows cool air
into their ear. Sometimes
she goes down on them,
moving from house to house
wondering who misses
her tindered touch the most.
Mostly, she likes to watch
one after another in fits
of mourning as bodies
convulse involuntarily,
when they, too, realize they
can no longer bear being alone.

Kelly Andrews
Kelly Andrews' poems have appeared or are forthcoming in PANK, Apeiron Review, Weave Magazine, Pear Noir, and others. Her chapbook "Mule Skinner" is available from Dancing Girl Press (2014). She coedits the online journal Pretty Owl Poetry and has a hand in creating B.E. Quarterly, a sometimes-quarterly zine.
Jasmin Bauer is a German artist. She works with acrylic and her verity is a mixture of pop-art and photorealistic objects. Her art has been exhibited in several castles and newspapers in Germany. Besides being an artist, she loves good wine and traveling all over the world. www.trendculture.jimdo.com
​