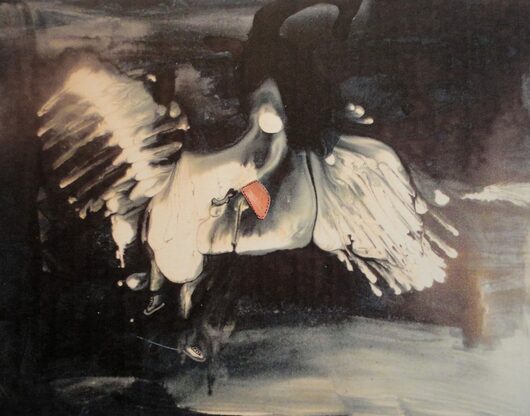 The Sea Witch as Joanna1

“her hair was wet, she was mostly naked, and she said she had been in the water”

Years earlier, something went wrong, and
she found herself upon the shore as a girl.

When the police found her, they asked, Are you hurt?
I don’t know, she said in her girl voice.

over her new form. What they hid
of her new body and what they didn’t.

They brought her coffee. She put it down
after a sip and someone said, Bitter.

They took her picture. They said,
Someone will recognize you. Call in.

They asked, Do you remember anything?
The sea, she said.

Do you remember anything before the sea?
The sea.

They offered to take her to a shelter.
She let them. She noted every street,

every window display, dresses and cakes.
She thanked everyone in the way

she’d observed thanking. And when
everyone was asleep, she went back,

and the land let go of her fast as it could.

1Around 3:15AM on Tuesday, the 4th of March 2017, Fresno police found a woman
wandering confused down the middle of a street. She claimed to be a mermaid named Joanna.
https://apple.news/AH5m7jUdpQTuMh0sH3g4dfw

The doctor says, “your urine is testing a little alkaline,
a little basic.” The sea witch holds back a cackle—

of all the things in the world to be called.

“A pH of 8,” and the sea witch completes her sentence,
like the sea.

“I recommend vinegar,” the doctor says,
and then tedium and paperwork and checking out.

At RiteAid, the sea witch finds white vinegar in the aisle
with the cleaning supplies. Swiffers, Windex, detergent.

She opens the jug and coughs hard at the smell.
She recalls the doctor, asking how often she has sex,

if she has sex in the shower, if her underwear is cotton,
if she dries off well. I do not dry off well, she had said.

She takes a gulp of the vinegar and nearly screams,
gapes and reaches for a broom handle—an employee

restocking sponges turns only her head.
The sea witch is scrambling now

through her memory of the appointment.
Was the doctor a woman more like herself

than she’d realized?? Her human throat burning.
Had she promised her anything? Anything at all?

Kimberly Quiogue Andrews is the author of A Brief History of Fruit, winner of the 2018 Akron Poetry Prize, and BETWEEN (Finishing Line Press), winner of the 2017 New Women’s Voices Series prize. Recent work appears in venues ranging from The Recluse to The Los Angeles Review of Books. She lives in Maryland and teaches at Washington College.

Sarah Blake is the author of Let’s Not Live on Earth (2017) and Mr. West (2015), both from Wesleyan University Press. Her chapbook Named After Death was published in 2016 with a companion workbook from Banango Editions. Past recipient of a literature fellowship from the NEA, her debut novel Naamah is out now from Riverhead Books.

North Vancouver, B.C. Artist, and Author Jenn Ashton has lived a creative life that has encompassed everything from farming to the Boardroom; from BC to Harvard and back again. Coming from an artistic family she has brought a creative flair to all her projects large and small. Jenn is known for her originality, resourcefulness, and vision.  JennAshtonArt.com