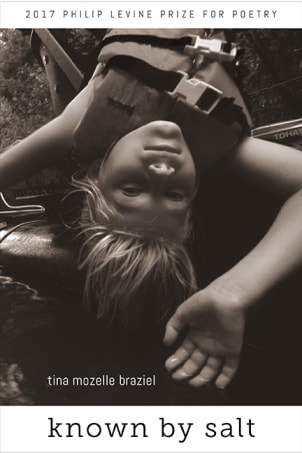 
​Braziel opens her collection with "Homemaking Along Lay Lake" and won me over before I turned the first page. The thing about rural Alabama that doesn't tend to make it into outsiders' perspectives is the neighboring attribute of wild things:

No one pays for muscadines, they're for jelly.

In my youth, I learned it was one thing to take something from someone's garden without asking but fruit that grows by tree or vine on its own is for anyone's grazing.

Tina Mozelle Braziel and I came up similarly, in trailers and in the heart of our rural grandmothers. We were both named for these women, a tribute and a challenge we’ll both spend the rest of our days claiming. That familiarity is maybe what lured me into this book and it'll be what keeps your interest.

Braziel shows us how her grandmother has shaped her gentle yet undaunted way of existence. From “Trespassing” to “Mozelle’s Shoes”, there’s an unaged praise and idolatry of her grandmother despite the shift from childhood to adulthood:

Why Grandma Mozelle took me trespassing
through half-built houses, I can’t be sure.

As if “because we can” was reason enough,
she often said nobody thinks of women and children
as thieves and vandals.

But when you call me by her name,
a name that sounds like the bounding
of a gazelle, my feet feel moccasined

in their own skin, and I know I can
leap any fence, run any distance.

Known By Salt is an unabashed and daring look at social status. More than that, it’s a study in privilege. I suspect it’ll make any reader, from the well-to-do down to those left wanting, look at their own standing.

In “Mama Said Nothing Good” we're taught appearance is a concept, but takes no root in real worth. Braziel, as a child, clings to ugly beans while her mother reminds her how the world works:

Mama said I’d amount to nothing
if I didn’t start caring how things look.

She said that we can’t rinse the dirt from our blood –
Not looking bad is all we got.

Braziel doesn’t believe in class and decides that despite where something or someone is from, destination is as unpredictable as a tornado's path. What happens if left to grow without insult? Status is a preconception and easily proven to be void of value:

I took it as proof that what is bad is just something good
appearing where it shouldn’t. I figured it

would take the power of Moses for those struggling creatures
to part the red clay, swim on down to a good sea.

Mama predicted that they’d choke,
that this is how something bad takes care of nothing good.

These poems take on even more metaphor as we realize Braziel comes from a meager beginning and goes on to build a grand glass cabin in the middle of the woods with her husband. The irony can be spotted quite well in “A Clear View”:

I hold panes in place,
while my husband secures their frames.

a neighbor may think
or decide to hurl our way.


The dare of judgment or envy appears humorous. Braziel knows her home is a reflection of her upbringing and kept modest, despite its stunning design that most anyone would dream of owning. It also develops its own class: that of a chosen quietness with the luxury to see all that matters to her, alongside her husband.

Want develops a new aim at the mere mention of Braziel’s husband in these poems; though these aren’t typical dedications of love, the romantic urgency is unrivaled. “House Warming” is maybe the finest example of pleasing a partner. The tone is nearly primal but also dreamy.


At dinner parties, my husband knocks on sheetrock
and plaster alike, testing the tensile strength of walls
and the space between studs. When his fingers wrap

around my wrist the way he grasps his hammer,
he will ask what I want: exposed rafters, a skylight,
maybe transom tilting above our front door.

Their home, we come to see, is a physical representation of a relationship built on solid ground; their passion and respect mirroring the home’s bold but tender build.

The parallelism of home in these poems is maybe the biggest love story. From a trailer park to a glass cabin built by hand, the foundation has always been dirt. Braziel understands it’s where we all come from and celebrates the beauty she wouldn’t escape from even if she could. This book, however or wherever you grew up, will make you want to go outside. It’ll make you want clean air and dirty feet. Tina Mozelle Braziel will help you understand why so many of us call Alabama home.

Read Known By Salt for the southern calm, the wildness of rural freedom, the love story of partnership and riverbeds. Read it to understand privilege and the overwhelming gift of grit. To know salt is for more than taste. Take from these poems the shelter they were built from and the red clay they’re coated in. Read Braziel’s poems outside and in the morning. And I hope you can hear birds where you are.

Rachel Nix is the poetry editor for cahoodaloodaling and Screen Door Review, and an associate editor for Hobo Camp Review. She lives in rural Alabama, where pine trees outnumber people, and can be followed at @rachelnix_poet on Twitter.