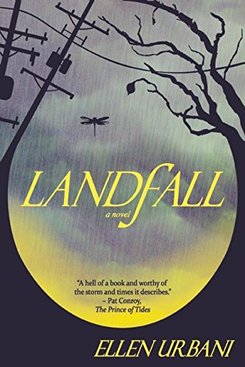 It’s easy to break Hurricane Katrina into political shards, usually to the benefit of one’s own staunchly held opinions. For many, the disaster was the first chink in what had been the teflon P.R. exterior of President George W. Bush after he led our country out of 9/11 and into the highly-questionable War in Iraq. For others, the storm and its aftermath revealed the plight of the poor, particularly African-American people, who despite the bullish stock market and accretion of home prices, were being left behind—quite literally in this case. For those focused on the toll of our carbon footprint on the environment, Katrina was the first of what was sure to be many disasters that would wreak havoc on not just the Gulf Coast but every corner of the earth. The event was many things to many people. Just ask them.

With the novel Landfall, author Ellen Urbani’s goal is more focused. Ultimately, Katrina was a storm that ended, ruined, or displaced thousands if not millions of lives, and by telling the story of two 18-year-old girls who suffered through the event and its aftermath, the author skillfully removes easy political overtones and unearths truths of family, trust, and hope that resonate with people of any stripe.

Urbani employs many tools to usurp your preconceived notions, but none is as effective as her replication of southern idioms. In one instance, Gertrude, mother to teenager Rose, expresses her displeasure with a colleague at Kinko’s: “That woman’s dumber than a box of hair! She went and made me so mad today that if her hair hadda caught on fire I wouldn’t even of stopped to pee on it!” Colorful, forthright, down-to-earth. Urbani never misses a chance to let Gertrude and her ilk tell it like it is, which allows her readers uninhibited access.

Daughter Rose is more of the chief interest of these two, especially once she and Gertrude leave their home in Tuscaloosa for New Orleans to donate supplies in the wake of Katrina, and a car accident leaves both Gertrude and 18-year-old pedestrian Rosy dead. Distraught by the death of her mother and the chaos surrounding her, Rose is drawn to learn about the dead girl, which leads her on a multi-city trek to uncover Rosy’s past. Through Urbani’s skillful back-and-forth telling from past to present, we learn of Rose, Rosy, Gertrude, and Rosy’s mother Cilla in language that feels deeply rooted:

Clad in savage mementos—dead mother’s underwear on her head, dead girl’s sneakers on her feet—Rose had wandered         into the living room and pulled a photo album off a low shelf. From the kitchen she gathered an apple and knife, with             which to quarter it, then settled into a chair at the kitchen table and perused the album.


There is that distinctly southern sense that the past is playing a very strong role in the present. Katrina merely had to crack the levee, and in floods these characters’ personal histories.

Through it all, Urbani takes great pains to reveal the ill-begotten place New Orleans became just after the storm:

A crow rode a corpse like a sea-bound vessel, screeching hale and hearty with a caw, caw, caw, plucking offal from the             host’s nose. In the hair of both the dead and the living clung the scent of fires that burned in places where the houses                 stood still on soggy foundations but the stoves, displaced, gorged their energy on the higher- up wood that had been                 spared water. Could have been a crematorium somewhere out there, a burn bin for medical refuse, a pile of diseased                 organs set to flame, so said the winds.

The air is redolent with the pain of millions, and Urbani makes a point to bring the city and all its desolation into stark relief.

Amongst such turmoil, everyone suffers, especially Rosy, but even those tasked with helping those in need. Urbani writes of a doctor who administered care at the Superdome after the storm:

The physician had been tracking the weather for two weeks, and had evacuated his own family to his in-laws' three days         ahead of the eye, but voluntarily stayed behind and made his way to the Superdome with a well-stocked first aid kit as             soon as he heard the doors had opened. In the subsequent four days, he'd ingested only three bottles of water and six                 granola bars. It made him slow; reminded him of his residency days. Hard to keep track of the IV rotations, so he wrote             himself very specific notes about the timing and contents of generic bags with black Sharpie he brought from home. His         wife used the pen to mark bags of chicken she stores in the freezer.

Such everyday details do wonders to create a pastiche of lives upended, rendering the breadth of disarray.

That, in the end, is what is most revelatory about Landfall. Urbani has crafted a story that evokes not obvious tropes and familiar battle lines, but genuine empathy.

ART EDWARDS' reviews have or will appear in Salon, Colorado Review, The Los Angeles Review, The Collagist, Word Riot, JMWW, Entropy, Cigale Literary Magazine, The Rumpus, and The Nervous Breakdown.