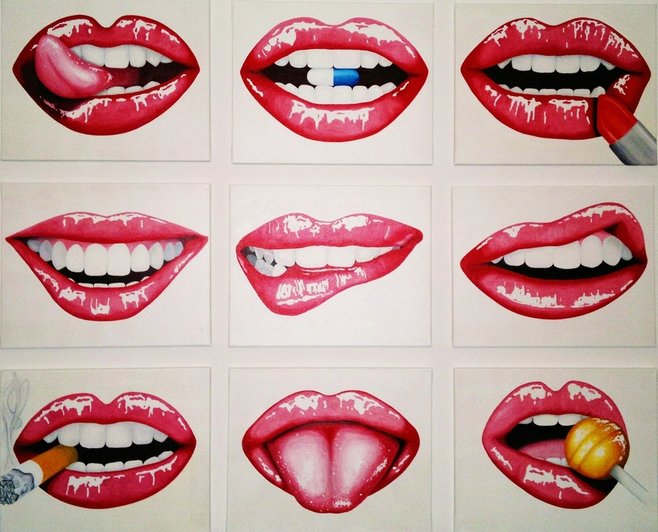 "Lippen" by Jasmin Bauer
Lovesick Woman Spends Week in KFC
​
Trust me, I’ve been there before: not
KFC but on NJ Transit trains, alone
at a two-person table tucked away
in the back of a Philadelphia bodega,
spreading myself like a slick of butter
not melting on the cold bread that is
a rented king-size bed in February.

You hadn’t planned on more than
a meal but remained for the zen-
like atmosphere: the fluorescent light,
odor of fried foodstuffs permeating
your soul, transactions made with
control and predictability: how many
pieces would you like? And gravy?

Young lady, I just want you to know
your hair looks like it’s been combed
with a chicken wing’s crispy coating,
and you could benefit from a shower
and fresh clothes, which would require
you to leave the 24-hour poultry palace
near the home you shared with him.

I’m so relieved to read you’ve left
the Colonel’s fast-food establishment
and have gone to your parents outside
of the city, where I hope you’ll find
vegetables: an abundance of fiber
and peace that comes after sustaining
your grief and honoring its hunger.

Laryssa Wirstiuk
Laryssa Wirstiuk is a writer and writing instructor based in Jersey City, NJ. She teaches writing and digital media at Rutgers University - New Brunswick. Her writing has been published in IthacaLit, Hamilton Stone Review, and The Stockholm Review of Literature and is forthcoming in Barely South Review. You can view all her work here: http://www.laryssawirstiuk.co
​Jasmin Bauer is a German artist. She works with acrylic and her verity is a mixture of pop-art and photorealistic objects. Her art has been exhibited in several castles and newspapers in Germany. Besides being an artist, she loves good wine and traveling all over the world. www.trendculture.jimdo.com