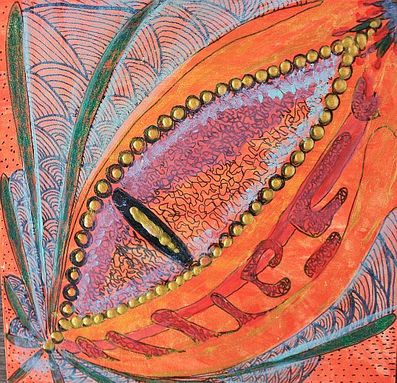 "Aboreal Eye" by Mia Avramut
As It Is
​
We ride his train of morals.
He skips rails on the furious speed. He says,
he says. Hollow: the voice
rolling in. I revise speech into shelter, and can’t say a word
to all the cold locomotion of his anger.

It would be trespass to cross it.

Black marks track and swivel down the full field.
I gather each rotation, each sadness.
If I listen a lifetime, I will not know the destination.

Such a particular rage, so scheduled — his incoming
collisions. My body is the only part that will stop bruising.

Lauren Camp
Lauren Camp is the author of This Business of Wisdom (2010) and The Dailiness (2013), winner of the National Federation of Press Women Poetry Prize and a World Literature Today “Editor’s Pick.” Her third book, One Hundred Hungers, won the Dorset Prize (Tupelo Press, 2016). www.laurencamp.com
​Mia Avramut is a Romanian-American writer and artist who worked in laboratories and autopsy rooms from Pittsburgh to San Francisco. Her poetry, prose, and artwork have recently appeared or are forthcoming in Prick of the Spindle, saltfront, The Knicknackery,Thrice Fiction, Conclave: a Journal of Character, Escape into Life, Santa Fe Literary Review, Petrichor Machine, Paper Nautilus, and several anthologies. She lives in Essen, Germany.