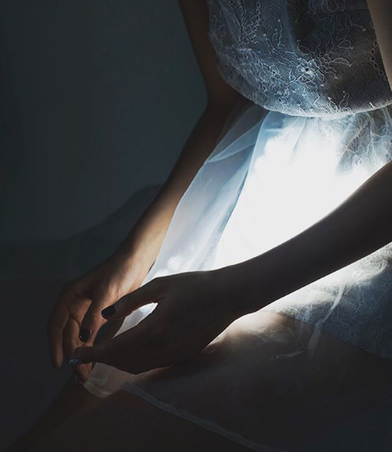 My aunt had to open up a
cat, slit the skin down the belly
claw into the inside, woodland
feline with the scent of
formaldehyde streaming
inside pink and grey and moist,
organs hard and soft at once and
the bones relaxed as if the
body could still purr. She never
mentioned the scent of the barrel
when she opened it to release
her drowned weekend project, the way
the body slumped as she picked it
up. Did she reach for the animal
the same she would a pet, holding
her hand out first for the cat
to sniff, reaching gentle around
the ribs, or did she go elbow
deep, reaching for the thing she had
to do? Like the time my mother
took me to my grandparents’ house
as Grandma pointed her knife close
to the buttons down the middle
of her dress and the house smelled like
piss because she had a dying
dog curled in the corner of her
bathroom and she swore she could make
herself go just like Grandpa, just
like the hound nestled silent
behind Grandpa’s toilet and I
wanted to look away so I
opened the milk because I was
thirsty and it tasted like it smelled,
which is to say like dog piss because
Mandy had lost all control of
her insides. Like Grandpa gone, like
the kitchen knife pointed at
Grandma’s dress, threatening to
open her like how they opened
Grandpa to fill him with
formaldehyde to make him look
more alive. The first time I was
with somebody he reached inside
and said you feel nice and he dug
and dug and it had been the first
time I ever felt open but
by this point the concept of
opening things meant the ending
of another, so I reached
for him in return,
something I had to do
in order to end it all.
Lisa Folkmire is a poet from Warren, Michigan. She holds an MFA from Vermont College of Fine Arts where she studied poetry. Her poems have appeared in many journals, including Atlas & Alice, Glass Gravel, and Timber. She is also a reader for The Masters Review.
In her mysterious monochromatic photographs, Jing Lin reconstructs a familiar world that no one has been to. Her background in motion pictures informs her current work. As a graduate photography student at Academy of Art University, she worked with multiple darkroom techniques in traditional and alternative printing processes. She blurs the edge between photography and painting through the use of experimental processes. Solitary, Jing’s most recent body of work, portrays a nonexistent place to examine the theme of self-confinement. Constantly, she explores photography with these questions in mind: What did I see? What did I not see?  www.jinglinphotography.com/