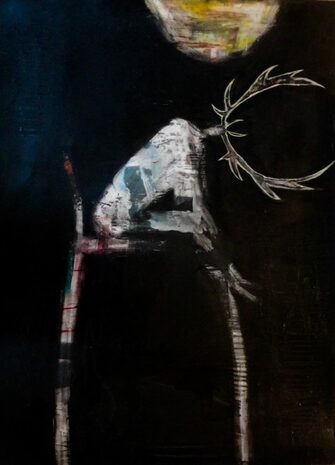 The Tidy Crimes of Personhood by Logan February

How to be gratified and carry on in this life
where no one gets what they want I want to die
happy after eating a giant bowl of spaghetti I want
so much water but only have these two beers
at 1pm I remembered the SOPHIE song I was going to
tell you about at 1am I was thrashing my head against
the pillow in an attempt to shake out the tight melody
I blame so many things on the Buddhist in me so many
tidy crimes of personhood like I never returned your calls
after our tryst in the penthouse suite last November
like I have never written a kind poem about my mother
like once in secret I tried on a white dress and swooned
from the innocence in the mirror yes yes I would like
to upgrade my unfortunate body to become someone
like a goddess but kinder and a little less eternal I would
like to say very boastfully that I have detached myself
from all worldly things which is a lie I still love the slow burn
of a shared joint spicy chicken the savage gyrations of sex
and I still hate liars and men who make a hobby out of blood
I want to have my fingers in my ears saying I cannot hear
the noises of this world but now again the little voice is
asking me if it is cold in the water yes yes it is quite cold
Logan February is a Nigerian poet. His work has appeared or is forthcoming in Washington Square Review, The Adroit Journal, Vinyl, Paperbag, Tinderbox, Raleigh Review, and more. He is a Pushcart and Best of the Net nominee, and his debut collection, Mannequin in the Nude (PANK Books, 2019) was a finalist for the Sillerman First Book Prize for African Poets. He is the author of two chapbooks, and the Associate Director of Winter Tangerine's Dovesong Labs. You can find him at loganfebruary.com
North Vancouver, B.C. Artist, and Author Jenn Ashton has lived a creative life that has encompassed everything from farming to the Boardroom; from BC to Harvard and back again. Coming from an artistic family she has brought a creative flair to all her projects large and small. Jenn is known for her originality, resourcefulness, and vision.  JennAshtonArt.com