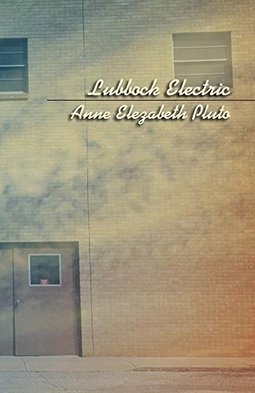 ​     Anne Elezabeth Pluto’s latest collection, Lubbock Electric, is a landscape of America, a strong rush across Texas, the Plains, to the East Coast’s Brooklyn and Boston. But it’s a landscape drawn with the sensibility and lungs of Emily Dickinson: her dashes, her breathless genius. Pluto presents the reader with a night sky that curves above a landscape dotted with buffalo “—giant as boulders/easily mistaken for Gods (“Lords of the Wichita”).” In poems that, for the most part, rely on syntactical direction for signposts—as opposed to punctuation—Pluto explores the cadences of love, of death, and of memory.

I miss you already
before arrival
the sun hasn’t risen yet
on you—the stars still give
Texas their light—when you hold
me in your hands imprint
their map onto my flesh . . . .

The speaker’s love is a pulsation, the words impelled (like the speaker) across, to the end of the poetic line. Listen as Pluto allows for a syllabic flow and ebb, as well as an accumulation of sound in “Love Letter to Lubbock":

My desire
moves me west
mind of my making
I dreamt you
for decades
a sturdy blond boy
on his father’s panhandle . . . .

The collection recounts a rhythmic journey of seasons, of death, of climates. The poems travel from Texas to the East Coast, signifying a colder place, a slower movement. In “Green May,” Pluto opens a portal to this other world, describing the skating rink near Copps Hill Burying Ground in Boston,

This “wide season/of painful repetition” is seen in Pluto’s poems where the impulse to go forward is met in equal force to the need to go back, resulting in the slow movement of memory. In “Mother Tender (2),” she resurrects Hansel’s and Gretel’s tragic trek,

The bread in the forest
Is all eaten by birds—the path
Back home will flow without
Words—the darkest silence . . . .

Movement is inexorable—or eternal—in these poems about death. In “Putney Bridge Station," Pluto writes, “You are the ghost that keeps on coming/up the stairs from the tube—”, but these “death poems” also change the dimensions of the physical and emotional spaces. While the concept of death is vast, the tomb is claustrophobic. The image of “dead animals in the house” in “Easter Sunday, 2017,” where animals are trapped, “—no space to turn and/retrace the journey in—the journey on” exemplifies Pluto’s juxtaposing the immediacy of the tomb with eternity.

Time and its slipperiness, the coupling of eternity and movement, surge throughout Lubbock Electric. Like power lines, the book thrums with this conflict. There seems to be a continuous journey to connection. In “Framed Twice,” Pluto writes:

You will come
East
to me, journey
of a star already risen
the sun behind you—the horse tethered . . . .

Like a completed electrical current, this star reappears in “Christmas,” the final poem:

This Christmas this story passes through as if you
had entered—welcome home this star it burns for me
as you—brilliant golden--
the light you bring me from the west . . . .

Lubbock Electric is breathtaking in its rushing lines of poetry, in its fidelity to a human voice. Like a “thunder to the landscape,” Anne Elezabeth Pluto recounts an ancient story on the American landscape: a nation with ghosts, destruction, tumbleweeds, love, and the “hot cape rock streets of Lubbock.” Pluto’s voice is charged and exciting, craving 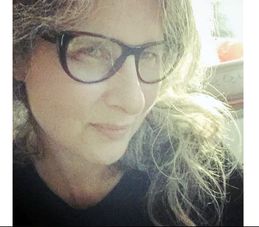 ​Anne Elezabeth Pluto is Professor of Literature and Theatre at Lesley University in Cambridge, MA where she is founder of Commonthought Magazine and the artistic director and one of the founders of the Oxford Street Players. She is an alumna of Shakespeare & Company, and has been a member of the Worcester Shakespeare Company since 2011. She was a member of the Boston small press scene in the late 1980s and is one of the founders and editors at Nixes Mate Review. Her chapbook, The Frog Princess, was published by White Pine Press (1985), and her chapbook Benign Protection by Cervena Barva Press (2016). Recent publications include: The Buffalo Evening News, Unlikely Stories: Episode IV, Mat Hat Lit, Pirene’s Fountain, The Enchanting Verses Literary Review, MockingHeart Review, Yellow Chair Review, Levure Litteraire – numero 12, The Naugatuck River Review, Tuesday, An Art Project, the Muddy River Review.