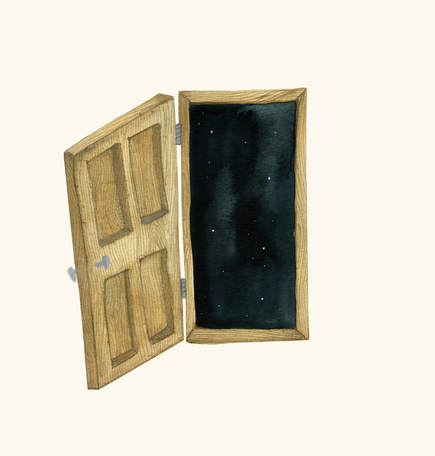 "Out" by Eva Dominelli

My Mother Had Hands Before She Had Children

A ghazal after John Murillo’s “Hustle”


Mom said she made her back bad from those hands,
raised three children plus her siblings with those hands.

Left the country and all its gins and rain hymns--
made a house from a paycheck with those hands.

Took a paint can and a ladder to a gutter,
made a garden from dirt and seed with those hands.

I told her once, I’ve seen angels on the ground,
while she turned a bathtub faucet with those hands.

She’s seen angels on the ground, too, ones with skin
and teeth and fingers that reach like with those hands.

Said a prayer and tied tobacco in red cloth,
burned sage smoke for peace with those hands.

Used to wade in rivers and bike fast as red,
pick peaches high as clouds with those hands.

For her first born she planted a magnolia tree
in the front yard, sturdy as a pillar from those hands.

She tells me when it’s time, I want my ashes spread,
so I can touch everything again with those hands.

​I tell her I’ll do it twice, I’ll run smooth as water
and still I’ll eat because of those hands.

Off Bayly, the train tracks split
the neighborhood like a highway,
steel & rust & picks in its teeth.
On one side, the bookstore, the library,
the breakfast spot with cinnamon rolls,
housemade. The other, Lee’s Chicken, the diner,
the storefront that is always changing
its name, ______ & then _____ & then—.
Off Portland, there was credit
before all us white people flew off & now
all the shotgun houses home huddled families,
the kids stashing syrup sandwiches for school,
hauling a backpack through a screen door past
a mother’s reminder of shoes on the front porch.
The smoke shops send men
with swisher sweets behind their ears,
past monkey bars & red slides & a swingset
on the corner & the Seafood Lady,
food-truck-turned-staple, Kool-Aid in jugs
& shrimp mac-and-cheese. Off 9th Street,
the highway split the city like Maniac Magee,
Black Wall Street turned skyscraper & hotel.
The bricks, Sheppard Square & Cotter Homes
& Beecher, Indi’s and King’s with plexiglass
over the counter, faces obscured like a windshield.
Churches with lines around the block, shaggy-haired men
and women with garbage bags bowing their heads of waiting.
Off 15th, the roads are one-way only, the buildings
closed up & shy, murals of faces & slant names
on the sides & parking lots made blacktops.
Garden beds raised on the in-betweens,
the Dirt Bowl Tournament, neighborhood squads
picking the rocks from their shoes & licking their hands,
the step teams & grill masters trading technique.
Way east, Indian Hills & Springhurst & Prospect,
where the buses don’t go, lakes & streams & fountains,
picnic tables & willow trees & tee ball games.
It’s like cleaning fish, this city, the head & eyes & spines
stripped clean to one side, all the meat to the other,
the hands doing the stripping swift & skilled & made to
Mackenzie Berry is from Louisville, Kentucky. She is currently in the 10th cohort of the First Wave Program at the University of Wisconsin-Madison and recently served as a Wisconsin Idea Fellow, Public Humanities Undergraduate Exchange Fellow, and Sophomore Research Fellow. She's been published in Vinyl Poetry and has work forthcoming in Hobart and Broadsided Press. She organizes, creates documentary media, and facilitates writing workshops. ​
​Eva Dominelli is a Vancouver artist and freelance Illustrator with a BFA in Illustration from Emily Carr University of Art and Design. Her mysterious gouache and ink illustrations playfully investigate the relationship between the private and the public experience of the everyday. She is currently working on her upcoming artist’s book Between Being & Nothingness.