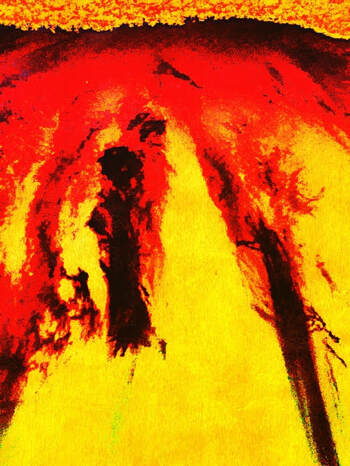 Mid-week,the instructor dribbles fake blood on a man’s scalp.
You watch it river down his forehead
and branch into smaller streams.
The notecard beside him reads:
Pulse: faint. Breathing: slow.

You’ve learned the worst injuries
are often hidden so you probe his armpits
and ankles then beneath his neck
for dark arterial blood. He won’t tell you
his name or the date but groans again
when you rub his sternum.

He is heavy. Deadweight.
It takes four of you to carry him
on a makeshift litter of backpacks and branches
until the instructor says STOP—

You forgot to check
inside his rain paints. Femoral bleed.
You failed so he’s dead.

When they train you to save people’s lives,
they explain an ethical duty to act.

If you’re in charge, you should intervene unless
the victim is absolutely/for certain/undoubtedly
beyond saving: a body below a cliff,
an unnatural bend in the neck.

You think of your father, a lawyer, discussing liability
around the dinner table. How he despised the risk
of backyard swimming pools and trampolines, hyperaware
of what could go wrong on his watch.

When the instructor said your safety is first priority,
you realize she only meant physical.

True, she warned you about Acute Stress Reaction—
how your pulse might surge, teeth might chatter,
at someone else’s broken bone—

but how could she convey the fear that now lurks,
fractured and raccoon-eyed, in the back of your mind?
All the ways someone can die in the woods
or worse: live for a time with a swelling brain
bucking against her skull like an untamed animal.

Back on the trail, you imagine unholy bodies,
your impossible job to clot all the bleeding.
Your father’s vigilance now your inheritance.

Lightning strikes and in its flash
you picture a charred body writhing
at the foot of your sleeping bag.

You dream a row of femurs ruptures flesh
like a white picket fence from the ground.

Mary Ardery is originally from Bloomington, IN. Her work appears or is forthcoming in Missouri Review’s “Poem of the Week,” Fairy Tale Review, Prairie Schooner, Poet Lore, and elsewhere. She holds an MFA from Southern Illinois University-Carbondale, where she won an Academy of American Poets Prize. You can visit her at maryardery.com.
Márcia Tannure is a visual artist, born in Belo Horizonte, MG, Brazil. She started her artistic practice when studying porcelain painting. Later, she studied observation and artistic design at INAP / MG. She graduated in Social Work from PUC-Minas with a postgraduate degree in art therapy from Projeto Terra / MG.  Some years later she moved to Rio de Janeiro / RJ, where she studied Sculpture at the School of Fine Arts of UFRJ. At the visual arts school Parque Lage she studied contemporary art and exhibition design. She currently lives in Niterói / RJ, Brazil, where she develops research in fire arts and has great inspiration from nature. You can find her on instagram: @marciatannure