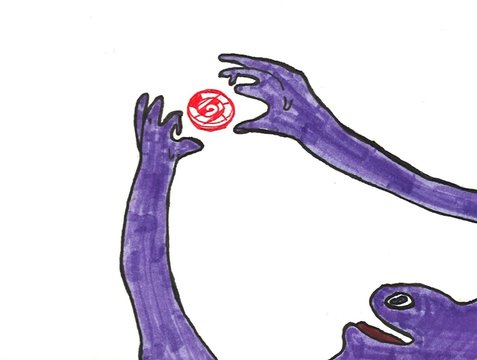 As my father shopped for DVDs, I stood in front of the Pokémon Stadium display & handed out gospel tracts:

they were Pokémon themed with blue and yellow text: Pikachu on the front, explained that Pokémon have super powers but so does God & how like Mewtwo we’re all searching for purpose.

I found them at my cousin’s church: a spinning rack of themed tracts. It was like picking out your favorite ice cream flavor: Pokemon, Harry Potter, Dungeons & Dragons, Monopoly, cartoon strips with pitchforked Satans, a picture of a curled-up fetus.

Some kids took the tracts to be polite & I went home thinking myself a good missionary, that someone might open one & be filled with relief as a new life surged over them, as if that paper could explain the thing alive inside me—as if anyone could explain that.
MEG EDEN'S work has been published in various magazines, including Rattle, Drunken Boat, Poet Lore, and Gargoyle. She teaches at the University of Maryland. She has four poetry chapbooks, and her novel "Post-High School Reality Quest" is forthcoming from California Coldblood, an imprint of Rare Bird Lit. Check out her work at: http://www.megedenbooks.com
CONNOR FIEWEGER lives in Chicago, Illinois and currently attends the University of Chicago, where he studies Physics.