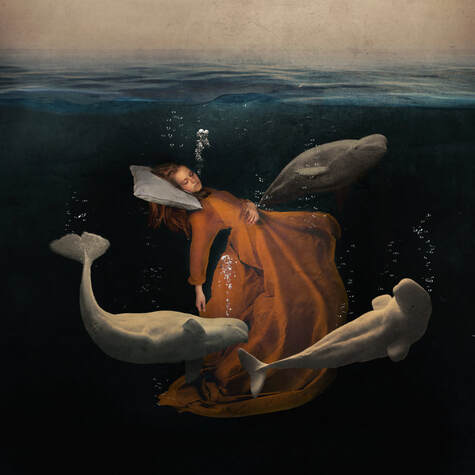 Last night I found a birthmark on the inside of
my lip. For years, I thought my lovers knew me

better than myself—they’d have to, after
all those angles & from such a

height. As a child you tried
to see yourself the way that you were

seen. Inside, what you were made
to bear seemed more than you

could take. The trick: to step
outside yourself—what one might call

deliverance—to see yourself as a distant
flood, a muddy body

moving. What could then be asked
of you was only academic. A test

of goods & limitation; an outcome
observed. But sometimes, you’re startled

back into yourself—like before the bathroom mirror,
the secret of your lower lip pulled open to the light.

Sometimes it’s nothing, easy even, to walk along
the river’s edge, thoughtless really, the sudden urge

to dive inside myself again—the stunning
knotted mess of self
​
I’ve been saving for something like this
Michaela Coplen is a Marshall Scholar studying for a Masters in International Relations at the University of Oxford. She received her BA from Vassar College, where she also served as a poetry editor for the Vassar Review. She was a June 2018 fellow at the Bucknell Seminar for Undergraduate Poets, and editor-in-chief of Scholastic Inc.’s The Best Teen Writing of 2015. In 2013, she was appointed National Student Poet by Mrs. Obama and the President’s Committee on the Arts & the Humanities. Her poems have been published online with The Atlantic and Poets.org, as well as in print with the Bellevue Literary Review. She was also recently included in Copper Canyon Press’s eco-poetry anthology, Here: Poems for the Planet.
​Fiona Hsu was born in February of 2001 in Orange County, California. She has won first place in Yorba Linda Women’s Club art competition in 2019 with recognition from Congress, Senate, and Assembly, and she is a National Silver Medalist of Scholastic Art and Writing Awards 2019. Fiona is currently studying at UCLA as an undergraduate studio art major. Her works capture the aspects of beauty within woeful and melancholic definitions that narrate quaint and odd stories, in which she hopes her art serves as rusty mirrors for her audience—reflecting and reminding them of a quality and/or memory from the past.