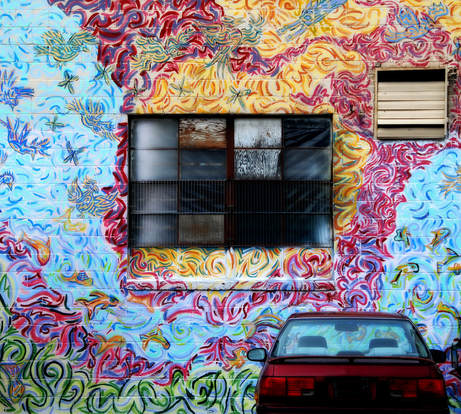 "I Learned About Summer Camp from Reading Books"

​in the kitchen instead of summer camp. an only ghost
in a locked apartment, a mute child hiding
from fingers lingering over our doorbell, in my badlands
the solid ground couldn't break its habit of crumbling. i kept

count with the steadiness of seagull wings navigating
jetstreams: add another day beading moisture
on itself, add a spot of blood, subtract the naiveté
of tv violence, subtract the halo of certainty

grown-ups wore like saints as they rained their fears
on me implacable like a blue sky aching
to be purple. in summer camp you go to a lake
and learn to swim, you stay in a cabin and learn to kiss.

i went to the lake for a day and i knew neither
how to swim nor how to kiss, nor how to be a person. we left
before sunset, the skin of me straining to hold back
the febrile urgency of ignorance. then i was

no longer twelve, then arithmetic gave way to word problems
and calculus, working to convince myself and everyone
that almost drowning daily was just another way to live,
an imperative stronger than living. i forgot i had been

a young deposed empress tiptoeing on treachery:
calculating how fast things changed every instant, how fast
change itself changed, how fast to outwit
to escape had been my secret skill. if we had stayed

longer that day, i might have seen that a sand castle
does not stand forever but the lake is not
any different. even shame ends, a kind of
exponential decay, the solid right angles of its box

acted on by multivariate derivatives as the structurelessness
of water rushes in from every direction
and mends. and when i take in a mouthful of lake, all that is
water blooms in me, and algae teach me how to float.
"Finally"

i was surveying the boundaries of a miracle, rolled out a map etched
on gabardine fog. my roommate said i could have her

intercessionary prayers. those spanish explorers once set out
like this: with one mission & two sails, always a spare to

chuck overboard. take a guess which i discarded first. i never
did learn to swim with one arm, & none of them, either. and if it took

five years for me to self-destruct? hasn't the word waiting
on my lips always been, finally? let me aspire to nothing more

than the brokenness i couldn't embrace. i was inconsolate, the sun
could melt, evaporate, circumvent flesh by burning. why coddle anyone?

i hadn't been taking care of myself. i pushed the heels of my palm into my eyes
to shuttle exhaustion back into my brain, sockets filled with careening colors.

the nights took care of itself, and when i laid back i mistook inky squalor
for silence. a mild case of synesthesia was the condition i wanted a diagnosis

for: i wished for something terminal. is that orange the supine
sweetness of squash? that watery blue the racing pulse of british

summer time? you could get lost naming them, a navigational
crutch like keeping your left hand on the hedges as you wind your way

out of a maze. you named your panic ___ & he says you could hardly function
without him. what are maps but someone else's lies you use to make it out alive?

i wanted to move to england & did & came back. look, it wasn't half bad
​when the word on my lips sat down and heaved, finally.
Mingpei Li was born in China and lives in New York City. She is a graduate of Harvard University and New York University.
Thomas Gillaspy is a northern California photographer. His photography has been featured in numerous magazines including the literary journals: Compose, Portland Review and Brooklyn Review. Further information and additional examples of his work are available at: http://www.thomasgillaspy.com
http://www.flickr.com/photos/thomasmichaelart/