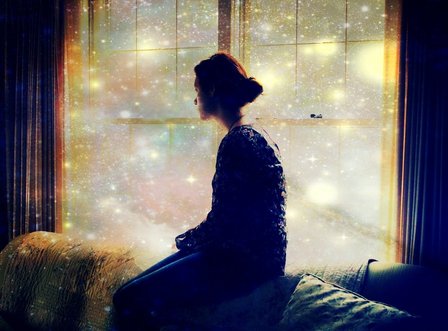 "Nightshade" by Meggie Royer
Back to Me


White cotton blend shirt as puckered as seersucker, expanse
of my dad’s shoulder like a movie screen
we hauled out to watch old super eight:
my cousin Jane scooting her butt into the opening
of an inner tube when she swam at Lake Metigoshe rewound

and replayed. There’s a cigarette in an ash tray in front of my dad,
a Kent, something mystical about the smoke rising from it.

Those pie crusts he made, a lit cigarette
balanced on his lower lip, not too wet, not too dry,
and the cigarette bobbing as he rolled the dough,
no ash ever in the pie
but I wouldn’t have cared if there had been.

His back to me:
he’s playing blackjack,
a stack of ones in his left hand,
actually his left hand an awning or canopy over them,
right touching or waving over his cards for a hit or not.
That shirt,
it’s hanging at my mom’s now.
She keeps asking if I’m ever going to take it.
Nancy Devine teaches high school English in Grand Forks, North Dakota, where she lives. She's the writer-in-residence for the Red river Valley Writing Project, a local site of the National Writing Project. Her poetry, short fiction and essays have appeared in online and print journals.
Meggie Royer is a writer and photographer living in Minnesota who is currently majoring in Psychology at Macalester College. Her poems have previously appeared in Words Dance Magazine, Winter Tangerine Review, Electric Cereal, and more. In March 2013 she won a National Gold Medal for her poetry collection and a National Silver Medal for her writing portfolio in the 2013 National Scholastic Art & Writing Awards. Her work can be found at writingsforwinter.tumblr.com.