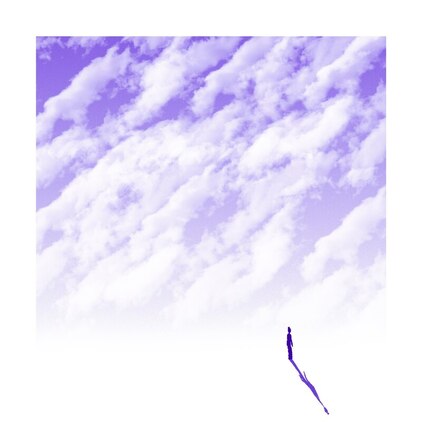 "Below the Shade of Clouds" by Kelly Emmrich

Displacement
The distance between
home and exile begins with
a man standing in the shadow
of his country this morning
while the sound of ache
throbs in the heart of a child
carried by a woman
across the streets of smoke.
Across the sea, the dreams
of immigrants dissolve like
salt, their lives craving to be
rescued from drowning in the
body of water that sways forth
and back, careening to silence.
Some nights, I think
of bombs glinting in the air
of this country while somewhere
there is a child in bed, his life still
innocent, pure like dews after rain.
I remember children displaced
by war, their parents holding
them like travel bags as they
stand in line to escape
to places faraway from home.
Losses
This morning the sky opens
into a country of birds.
In a field unmarked by war,
a woman teaches her child
how to tame a butterfly,
how to dream like birds, like all
the things in the world that soar
beyond the smoke of bombs lifting
into the air on tragic nights,
on days when people gather
like fireflies, their mouths heavy
with lamentations, with dirges
to offer to the ruins of the world
that remain amidst the dreams
they crave the way an arid land
craves rain. In their silence the
weight of sorrow, they count their
losses: houses reduced to bits
of dust, bodies of the dead
evacuated beneath fallen buildings,
graves of their dead left unadorned
with roses, with what will stand as
a monument for lives erased by
the wind of war, by the tide
of losses that returns tonight
to meet them gripped
by longing for their dead.
Rasaq Malik's chapbook, "No Home In This Land", selected for Chapbook Box edited by Kwame Dawes and Chris Abani, has been published. His work has appeared or is forthcoming in Colorado Review, Crab Orchard Review, LitHub, Michigan Quaterly Review, Minnesota Review, New Orleans Review, Prairie Schooner, Poet Lore, Rattle, Salt Hill, Spillway, Stand, Verse Daily, and elsewhere. He won Honorable Mention in 2015 Best of the Net for his poem "Elegy", published in One. In 2017, Rattle and Poet Lore nominated his poems for the Pushcart Prize. He was shortlisted for Brunel International African Poetry Prize in 2017. He was a finalist for Sillerman First Book for African Poets in 2018.
​Kelly Emmrich is an illustrator and animator living and working in the Blue Ridge Mountains. Her work has appeared in the magazines Moonhood Magazine, Dream Noir, and Meat for Tea. She studied creative writing and animation at the University of Mary Washington. She is currently working as a beer label designer for a microbrewery in Afton, Virginia and also as a freelance animator and illustrator.