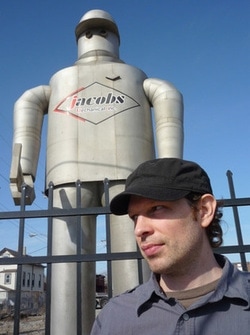 ROB JEFFERSON was born in 1970 on a naval base in Memphis, Tennessee, and has lived and worked in Cincinnati ever since. A graduate of the Art Academy of Cincinnati with a BFA in painting and drawing (1992), his work has been featured in various publications including 100 Midwest Artists, New American Paintings and Playboy Magazine. It can also be found in the permanent collections of the Cincinnati Art Museum, Otterbein College, and in various private collections. His freelance experiences have ranged from production artist for theater, special events, and the entertainment industry, figure sculpting for Kenner Toys,  to caricature, portraiture, mural creation/restoration, to illustration and comic book work. He is currently a production artist for LF creative and in the 1990's served as a production/installation assistant for several artist's including Nam June Paik through Carl Solway Gallery. He is also co-founder of Four Directions Studio, located in the historic business district in Westwood, on the west side of Cincinnati.