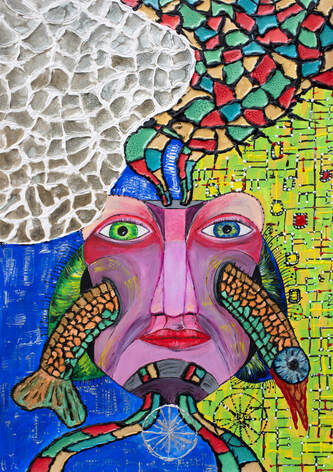 Infection
Once more, you wait for an illness
to lift you from the rut of your body.

a fox in heat. When you first
came here, you thought a squirrel

was carried aloft by a hawk
night after night, its mournful shrieks

fading in the distance. You knew
what had to happen at the end

of that flight & willed yourself
to imagine something else.

A baby with colic. A mother, at her
wits’ end. A father, always gone.

After weeks of listening in, that baby
weighed more than the threadbare

satchel of your mind could carry.
Once morphed into a fox,

you pictured it old & sick, steeped
in its solitude until it became

someone’s roadkill. Local foxes
have been dying of lungworm.

Crenosoma vulpis. You know this
because your dog almost died of it, too.

There were times during her slow
deterioration when you thought

a quick death was preferable
to all that suffering. Now she sleeps

next to you on the bed, oblivious
to the desolate wails outside.

She’s heard them before & has grown
immune, while you can’t help

but tune in, hungry for that despair
seeping through layers of plaster

& brick. In the vineyards behind
the house, a limp-tailed shadow

slinks close to the ground, keen
nose to the wind. There’s a scent

of the familiar in the air, a loneliness
settled deep in the bone.

Lovelorn, the old fox cries out
& out of the wrong, eager body,

​the loneliness answers.
What She Said
After Gertrude Stein

Let me give you a rose that symbolizes
everything I’m afraid of--on a
Monday, hours after I’ve eaten that
catfish you sent me. Should you
find the rose on your porch this coming
Wednesday, around noon, it will mean,
Just call me. Also, I miss the sound
of your voice. Also, I want to hold your face
in my palms. Sundays are tough. A rose
on a Sunday might say that I’ve had it
with the pandemic. I’ve had it with politics.
Inequality. Hunger. It could also mean, I’m
tired. I’ve had it with myself. I’ve decided to go
to sleep instead of reading the news. I’ve
decided not to send you any more roses.
All the other days of the week, after
any meal or quarrel, news-induced stupor
or bouts of self-denial, please know
that even the absence of a rose weighs more
than these frail letters I cast to the wind.
Ad infinitum, whether or not you are
there to receive them. Whether or not I am
here, droning on like a broken record
how a rose is still a rose is a rose is a rose.
Originally from Chisinau, Moldova, Romana Iorga lives in Switzerland. She is the author of two poetry collections in Romanian. Her work in English has appeared or is forthcoming in various journals, including Poet Lore, New England Review, Salamander, Gulf Coast, BOAAT, as well as on her poetry blog at clayandbranches.com.
RowanArtC feels that the work should speak for itself and invites the viewers to go wild with their imagination. The world within us (random thoughts and emotions) is a rich spring of inspiration for her work.
​