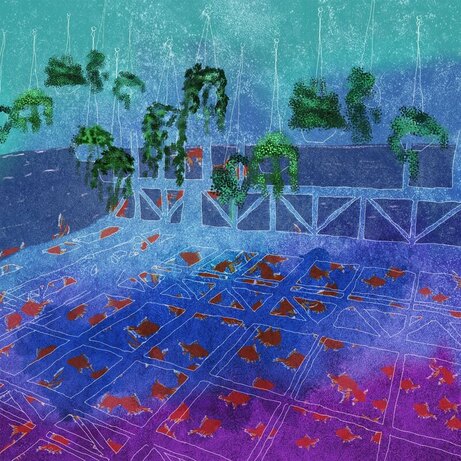 In the Rust of Ships there are Journeys by Romeo Oriogun

San Tiago, I would like to fall into pristine
sands but I am in the veins of history.

They sail. A turtle births on these islands,
from it springs dryness, a drought

in this Portuguese halfway house,
where names disappear in the middle of sea

and the land, windy, withstood
harvest pleas of colonization.

On this archipelago of awakening roots,
sibling to hundred tribes, language

rhythms into air,
into sweat on backs, food

of past lives, where a man pounds
fufu, prays over vegetables,

the meat in it, palm wine swirling
in calabash, before water

folded itself over man.
And from this slice of land,

mourna, mourna, mourna,
fireflies are singing into ships.
Read more of Romeo Oriogun's work in issue #44 of UtSQ.
Romeo Oriogun was born in Lagos, Nigeria. He is the author of Sacrament of Bodies (University of Nebraska Press, 2020). His poems have appeared in Prairie Schooner, American Poetry Review, Harvard Review, McNeese Review, Bayou, Brittle Paper, and others. He currently is an MFA candidate for poetry at the Iowa Writers’ Workshop, where he received the John Logan Prize for Poetry.
​Kelly Emmrich is an illustrator and animator living and working in the Blue Ridge Mountains. Her work has appeared in the magazines Moonhood Magazine, Dream Noir, and Meat for Tea. She studied creative writing and animation at the University of Mary Washington. She is currently working as a beer label designer for a microbrewery in Afton, Virginia and also as a freelance animator and illustrator.