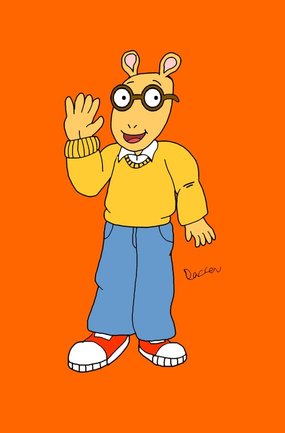 after Arthur, the animated TV series

Jenna is asked to spell essential. She trips before Arthur is challenged with aardvark.
​He freaks out: What am I going to do—what am I going to do?
Arthur rolls his arms, swings in his blue jeans & yellow cotton sweater,
sings out each mellifluous letter, as if memory held the body accountable
for demonstrating the ritual of remembrance. Gets it right. With only a year
of ESL, I win my school’s spelling bee. I spell platypus correctly, though
I can’t conceive of a platypus. I know plate; I know pus. My mother works
three jobs to pay for my tuition because the people we clean houses for
claim it’s better than getting beat up in public school. I come home
with a bloody nose nearly every day. The school’s denomination is Lutheran,
so we memorize Luther’s Small Catechism, forever confessing sins
in hushed purgatory. It’s private like the school I attended in Tegucigalpa--
you can’t get a decent education otherwise—& my mother reminds me
where to mark accents on Spanish words, like crossing off memories I’m losing
from lack of access. Just imagine a clock, she says & the altar behind me vibrates
when I am assigned the word platypus, picturing it in my head as if I were cutting
around it with a crude pair of scissors. I am not expected to win; to everyone’s
knowledge, I don’t speak sufficient English. Arthur advances to the finals,
but he doesn’t want to represent his class at the school-wide SPELLATHON.
Mr. Ratburn thinks I can do it, he shares with his family over a simple dinner.
If only all brown children had similar mentors. I begin gorging on new words.
Hood nomenclatures. I learn their roots but never my own. I spell platypus
& even the pastor’s wife can’t trust her ears. Afterwards, the certificate bears
my name in sloppy ink over marker. Maybe she was starting to write down
someone else’s surname when I was declared champion, or maybe she wanted
her son, who’s in my grade, to make a comeback & win the title. He’s blond
& I have a crush on him because I can see all the veins through his pale body;
he excels in every subject, that’s what everyone expects of him; I receive
the same grades, but that’s not expected of me; Literature is the subject
that persistently keeps me off the honor roll. I keep looking up words from
Romeo & Juliet in the dictionary but my dictionary isn’t smart enough.
Inadvertently, I’m looking up contractions, abridgments. Contraction: C-O-N-T-
R-A-C-T-I-O-N. Contraction. As in establishing a contract with anything that
dwindles; as in new disease; as in unplanned childbirth of words. Platypus:
from flat-footed. The schoolmate who called me fag behind my back enrolled
in the Marines around the time I signed up. We’d train as a unit. I’d look over my
shoulder, paranoid that, given the opportunity, he would out me. He was flat-footed,
was never deployed. Faggot: F-A-G-G-O-T. Faggot. The majority of us recruits
were the first to land in Iraq & Afghanistan, primarily poor, sons of refugees,
to die abroad as if dying on U.S. soil wasn’t already effortless. They are not looking
for brown minds but brown war machines, my stepfather says. The beauty
of machines is that they can be disassembled & reassembled. DW says, I’m not
a prisoner of my vocabulary—but I can spell anything that prays for my destruction.
A palindrome is a word that has two chances to disappoint you. There came a point
when I was so pedantic & territorial with words I couldn’t finish full sentences.
Spelt words in my sleep. Embalmed my thoughts. I watch Arthur when I’m sick,
to my past lovers’ chagrin. Cartoons are too infantile, they say, like parents who dab
hot sauce on their children’s fingers to discourage them from thumb sucking.
They can’t see which episodes I’ve hidden my luggage in, kept my dog-eared
thesaurus, my musty diplomas like diplomats to intercede for me when my accent
is called out, as if my tongue held lesions unconscious to me. What dictionary
are you using? the Brain says after he misspells fear. Fear as a part of speech.
Synonyms: transgressions that can only be found in mirrors. Can you use it in
a sentence? I was applying eyeshadow when my cousin stumbled into the bedroom
my mother & I slept in. I must’ve left an afterimage in the mirror, smeared with
a brown boy’s thick eyelashes, a shade of blue to enrapture other brown boys,
as I turned around to stare into her eyes, ankles shaking in my mother’s pumps,
hands behind me, as if handcuffed. I slipped the cosmetic through the narrow
gap of a drawer, half the heels trapped under the chiffonier. A broken TV
screen. In the episode, Arthur, in his round brown glasses, polytonal specter, sings
letters to a word that might define him. My parents aren’t home yet. I rub
VapoRub on my temples. I’m back at the Lord’s table, mispronouncing the wild
dream that finds me in a language that I might speak, from which I might drink.
ROY G. GUZMÁN is a Honduran poet raised in Miami, FL, and an MFA candidate in creative writing at the University of Minnesota. His work will appear in Assaracus and Juked. With poet Miguel M. Morales, Roy is editing an anthology, Pulse/Pulso, after the tragedy in Orlando. Contact him: roygguzman.com.