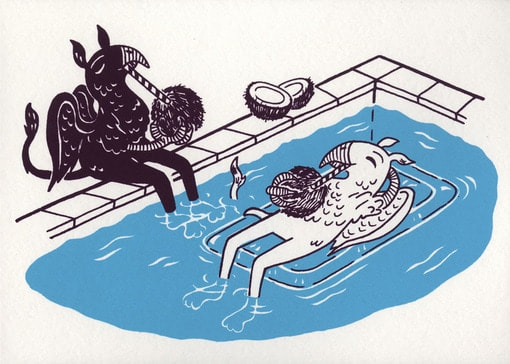 We rally to the table for a round of bowling
and by bowling of course, we mean to ladle
our sangria from a bowl, no relation
to the lane sport.

We slide onto the topic
(we always end up
here at some point)
of ourselves.

Okay, everybody, let’s go around
and decide, if each person were a province...

A risky game.
Nobody wants to be
Manitoba. Or worst of all,
Ontario. Grass is greener,
and all that.

I see myself in the spoon.
They’re reflective, you know.

But there’s something else, too.
I see the spoon in the spoon.
All its spoon feelings and spoon curiosities.
What it does when it thinks it is alone,
and that time it felt vulnerable
in front of the salad tongs.

(if only the egg beater would speak to
the spoon)

The way the spoon wonders,
as it slicks through a bowl of ice cream
or stirs a pot of soup, if there is anything
beyond this dish, this kitchen, this day in day out
business of scooping.

Anyway, I ended up being Ontario.
SARA PETERS is an artist living in Toronto, Ontario. Her written work can be found between the pages of Life Rattle anthologies, University of Toronto course packs, the EDSS poetry anthology, and ACTA Victoriana. It has also been featured on the Life Rattle Radio Show, and on the stages of University of Toronto's Hart House and The Second City Theatre. Sara is the recent recipient of the City of Toronto's Women and Gender Studies Scholarship for her commitment to the diversification of media. In her spare time, she assists with the publication of The Casserole Magazine.
ALEXANDRA BEGUEZ is an illustrator, cartoonist and mythographer based in New Jersey. She has a love for bright colors, science fiction, hoofed beasts, potatoes and cautionary tales. Her comics and illustrations appear in Little Nemo: Dream Another Dream, Quarter Moon, Ink Brick and Carboncito. She has received an Honorable Mention from the Society of Illustrators of Los Angeles Illustration West 53 and a 2014 MoCCA Arts Festival Award of Excellence, as well as having work featured in the Society of Illustrators 2015 Comic and Cartoon Annual. Recently, her work was chosen to be included on Latin American Ilustración 4’s online collection, The ARCHIVE. She is currently enrolled in the MFA Visual Narrative program at the School of Visual Arts.