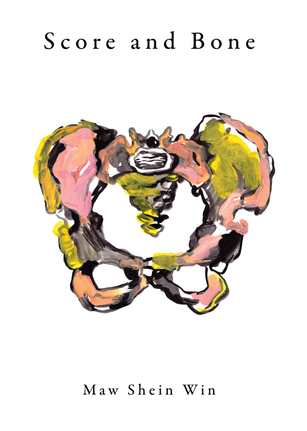 I read Maw Shein Win’s latest chapbook Score and Bone (Nomadic Press) during the two weeks before the 2016 election. It was a favorite escape from the daily barrage of crude insanity. I’d turn off my computer and phone, snuggle up with my cat and cherish spending the next hour or so in a rich terrain of unexpected scenes and stories. Unlike the real world around me that has come to muddle my mind and crush my spirit daily, the words and worlds traversed in Score and Bone are vivid and alive with pleasure, pain, and an absurdity that captures the human experience with a playfulness rather than defeat.

Score, the first section of poems is presented as a series of films. While each ‘film’ fits within one page, some are considered Shorts, others are Random Film Shots, Close-Ups, or Dialogues. There are Two Documentaries, the Score, The Treachery of Images, and The Missing. All are mesmerizing and stripped down to the core in a way that leaves the reader/observer lingering on the beauty and power of the elements Win provides.

At times I found myself becoming a collaborator, adding to the narrative or contextualizing a scene within a memory from my childhood or travels.

In the opening sequence, the train pulls into the station.
It is 7:00am, overcast.

Immediately I am transported to Delhi, India, where I am standing on the crowded platform under the gray morning sky in 2005 waiting for the train to Agra. The poem continues two stanzas down:

A white cat darts through the legs of the crowd jostling towards the exit.
A boy clutching a burlap bag falls down and four apples roll out.
No one looks.

I recall seeing a sleek, all-white cat running in between the bright fuchsia, marigold, tangerine, and emerald saris of the women exiting the cars of the train with their bags overflowing with fruits, vegetables and other staples. A young boy standing off to the side grasping for several apples as they spill from his bag. The memory was distinct; the reality was not.

Mostly, I experience the works in Score as glimpses into the lives of others who are moving through space and time as we all do, with varying degrees of grace and clumsiness.

Two of my favorite Short Films:

3
The ending starts at the beginning.
Sound of a couple arguing in a restaurant.
Or the other way around.

5
The soft tissue of his armpits.
Laughter in the bedroom.
An abandoned farm and a deserted mall.

Bone, the second half of poems is a series of reflections on the fragility, inevitability, and resilience of our physical nature. Titles include The Wheelchair, The Thermometer, The Cane, The Operated Leg, and Things That Begin. As someone who was diagnosed with multiple sclerosis 15 years ago and whose partner also has chronic diseases, these passages read like a shadow diary to me. The experiences of being poked and prodded; the dependence on others; the heaviness of uncertainty; the seemingly endless hours of immobility and isolation that can lead to unforeseen visions of beautiful, yet sometimes unsettling terrains; the drugs that can act as the same; and the humor that is such a welcome character as it unexpectedly enters at the moment when darkness is beginning to settle in, bringing new light. All of these experiences are brilliantly captured in Bone.

The Dressing Stick with its playful and strange trajectory starting with a limb and its association with a small bear reminded me of an MS episode during which I had the sensation that my right foot was like the paw of bear. I would try my best to describe what I was experiencing to my doctors: “It feels like my right foot is a bear’s paw, hardened and with too many toes.” As I said this, the doctors would look perplexed, yet also ready to crack up, understandably so. While it was frustrating that I could not truly convey what I was experiencing, I also was fully aware of just how ridiculous the description sounded.

Win so perfectly captures these moments of lucid folly that can accompany ailing bodies and minds – so familiar to those of us who have been there; and yet still fresh with delight and madness for those who have not.

The dressing stick, a limb
on the edge of the green
and a twinkling star on the head
of a small bear, polydactyl paws,
matted skin, a seven-inch scar on the left hip.

She peeled the scar back and underneath found a child wearing a star hat
and star shoes. The hospital stood in the center of a large cornfield and
observers remarked at its beauty and precision.

They came bearing frankincense and Oxycontin.
They wore shields.
They could sew.

They came bearing pork and beef on platters.
They held liquid in wires.

She waved the dressing stick and the wires spelled words to her
through the window of the blue tent.

It is with a bittersweet sense that I look forward to many more hours with Score and Bone while I await Maw Shein Win’s next collection to be released, as I foresee a strong need to find hours, days, and possibly years to escape from the potential of our current reality.


(Full disclosure: I have worked on a number of collaborations with Maw over the last 15 years. Most recently, Broadside Attractions: Vanquished Terrains, a project that paired 12 writers and 12 visual artists to create literary and visual works that culminated in a series of broadsides and an exhibition at Intersection for the Arts in 2012.) 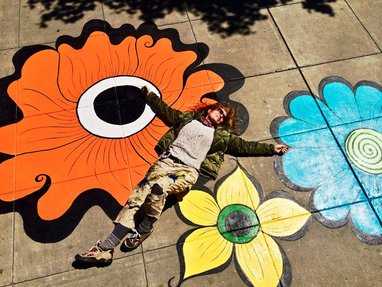 ​Megan Wilson is a visual artist, writer, and activist based in San Francisco. Known for her large-scale installations, public projects, and street art, she incorporates a broad range of pop culture methodologies and aesthetics to address conceptual interests that include home, homelessness, social justice, anti-capitalism, impermanence and generosity. Wilson co-founded the San Francisco based arts website stretcher.org. Her writings have also appeared in afterimage, Digitalcity, Public Art Review, the SF Bay Guardian, and Art Practical; in the book Street Art San Francisco Mission Muralismo; and in Reimagine: The National Journal About Race, Poverty, and the Environment.