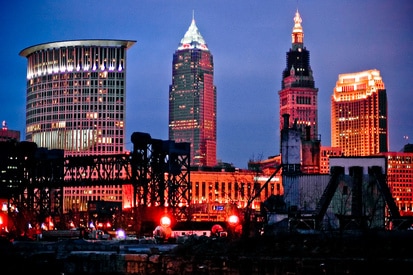 I do not blame the dirt for wanting to shimmer.
I blame the water for thinking it’s too good to make mud.

1.
Some people think my city is a punchline.
They think we’re really bad at sports and staying alive.
That we’re so ugly no one would ever put a ring on it.

“Why do birds fly backwards over Cleveland?
…Cus there is nothing worth shitting on!”

“What’s the difference between Cleveland and a bucket of shit?
...The bucket!”

Some people think we have the filthiest mutherfucking mouths in the Midwest.
My city thinks some people are what happens when you don’t grow up here,
when you grow up somewhere sure tomorrow knows your name and calls it
‘til you answer.
My city thinks that’s a joke it will only get in hindsight.
My city don’t get nothing ‘til after the fact,
‘til Lebron returns,
‘til the protesters leave,
‘til the crime rates drop some.
My city might not be here when that happens,
might be at the crossroads waiting for everyone else.

My city makes the apocalypse look reasonable to outsiders.
My city looks itself in the face every morning without wincing.
My city can’t say its own name without hearing Tamir Rice scream.
Without hearing no scream at all from three-year-old Major.
My city is a dead baby joke you snickered at and are embarrassed about.

“How do kids from Cleveland spend their first week of school?
...Studying their Miranda rights!”

2.
Cuyahoga County was named by the Seneca Indians.
It means place of the jawbone.
The jawbone is the hardest bone to break,
typically is the first place punched.
I did not read this anywhere.
My father told me when I was eight.
He said no one alive knows what or who,
but our city was struck in the jaw.
He says when the Cuyahoga River caught flames,
it was blood stepping outside getting some fresh air.
He said it was all of our blood,
anyone who was ever born or will ever be born in Cleveland,
and they think our blood is dirty,
and they think we are all wounds festering,
and they think we will infect them,
and sometimes no one even notices a person’s problems
until they set themselves on fire.
My city is a proud pyromaniac licking ashes off its fingers.
My city knows the recipe on making water thicker than blood.
My city would tell you, but it does not trust you
not to laugh.

*This poem was inspired by a prompt from Will Evans via the Penmanship Anthology
SIAARA FREEMAN is growing her afro so tall, God mistakes it for a microphone. Siaara wants to grow up and be the patron saint of lost causes who found themselves.