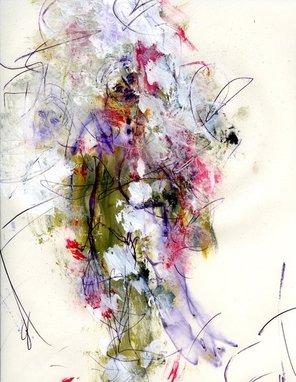 "In Conversation with My Art" by Ernest Williamson III
​*Between two fingers
you expect a knot, the string
is used to breaking its fall

are carried off
by an icy stream
tighter and tighter, the cover

beginning to close, first
as snow, years later
over your lips already distances

lets you say something
in secret, close to the ground
emptied out in the open.

Simon Perchik
Simon Perchik is an attorney whose poems have appeared in Partisan Review, The Nation, Poetry, The New Yorker, and elsewhere. His most recent collection is AlmostRain, published by River Otter Press (2013).  For more information, free e-books and his essay titled “Magic, Illusion and Other Realities” please visit his website atwww.simonperchik.com.
Dr. Ernest Williamson III has published poetry and/or visual art in over 500 national and international online and print journals. Many of his works have been published in journals representing over 50 colleges and universities around the world. Dr. Williamson is an Assistant Professor of English at Allen University. Professor Williamson's poetry has been nominated for the Best of the Net Anthology three times.