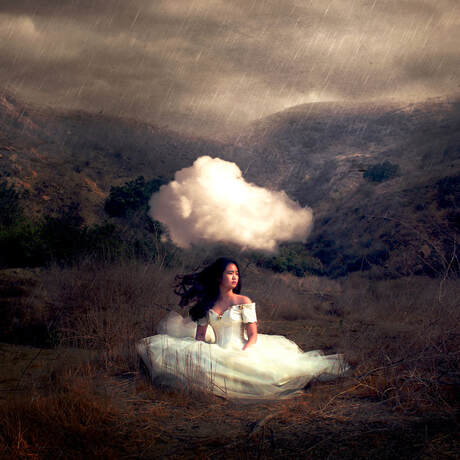 "The Fallen Cloud" by Fiona Hsu

holes in the water.

To unhook a fish lip, unravel
it like a scroll. Some ancient truth

No one asks where our daughters
have gone. You assume

they’re bare in the woods,

negotiating with witches to save
their mothers. What this country

does to its women.

What x country can do
while not one politician flinches,

instead kisses a bullet’s butt.

America has a selective membrane
for prayers. There’s x% chance

the journalists will martyr you.

America searches the streets
for who’s got their facts straight.

In X House, men martyr themselves.

All my classmates throw their money
at test tutors, few planning

to sit the test. Their net worth

x billion. I’ve got a vague memory
of papers on the kitchen counter,

of a government suit who sighs

as he riffles through a wallet--
the coins one could count

if my sister and I

were dissolved to copper.
A less poetic way of saying

my mother didn’t stumble upon

opportunity—not when leaving x
was almost a choice.

every era: the physics of sainthood.
Who moves where, when,

and who should care less

about x. What but this country
invented the oxymoron?

I am trying to dissect
the flesh of Lady Liberty,

label each part by danger

to x people. All my classmates
laugh when told not

to say x, how they’ll end

up inside ivy walls.
How I am encouraged to

politically. Exploit the political
when it “benefits”—it doesn’t

ever. All anatomy is dangerous.
Stephanie Chang is a high school senior from Vancouver, Canada. She is the daughter of immigrants from Hong Kong and Taiwan. Her work appears or is forthcoming in The Kenyon Review, Cosmonauts Avenue, Adroit Journal, Berkeley Poetry Review, and others. She is a National Gold Medalist in the Scholastic Art & Writing Awards, recipient of the Anthony Quinn Foundation Scholarship for Literary Arts, and Best New Poets nominee.
​Fiona Hsu was born in February of 2001 in Orange County, California. She has won first place in Yorba Linda Women’s Club art competition in 2019 with recognition from Congress, Senate, and Assembly, and she is a National Silver Medalist of Scholastic Art and Writing Awards 2019. Fiona is currently studying at UCLA as an undergraduate studio art major. Her works capture the aspects of beauty within woeful and melancholic definitions that narrate quaint and odd stories, in which she hopes her art serves as rusty mirrors for her audience—reflecting and reminding them of a quality and/or memory from the past.