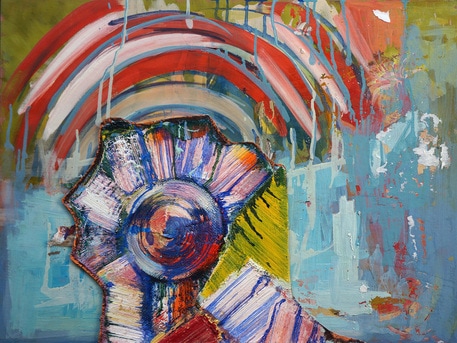 Two lanes of cabs crowd Lockwood Blvd.
hurrying lives in and out of chain hotels
that advertise themselves as downtown
but are touching the same darkness
that touches the water. A truck flashes his lights
at me as I walk through the median
but waits, as perhaps one would
for a duckling or doe. Doesn’t honk,
perhaps knowing the need to sink
into soft earth by the shore.
Perhaps he hates the sound of his horn.
I can’t know. It is November
and I am tired of paying bartenders
to speak to me. There’s a man
who speaks of buying houses while I dream
of licking cream. The only man shorter than me
I’ve ever held—I like to bend down
to kiss him like I’ve been kissed my entire life.
I call my high school friend in Lansing to tell him
I am looking at a river he’s never seen.
He tells me he’s sitting on a couch
in his lover’s house, the woman I went to church with
as a girl but don’t remember, the house
he refurbished for two years, the couch
where he pulled my jeans to my knees and didn’t ask
me to touch him back. I tell him the river
is steadying me. And he knows better
than to ask how much wine so he tells me
about making Christmas. Would I like
earrings or a necklace. He’s been doing glasswork
and I don’t want a bowl. I am old
and not in love but loved. My oldest friend
is on the phone stoned, his wisdom
teeth carved out. I am the only person who’s come
out to the river to be alone with its quiet pull,
which is to say, perhaps, I am the only person
in Charleston tonight who needs
to be pulled into myself. The mud doesn’t mind
how I ask it to do things and scurry home.

STEVIE EDWARDS is a poet, editor, and educator. She is Editor-in-Chief at Muzzle Magazine and Acquisitions Editor at YesYes Books. Her first book, GOOD GRIEF (Write Bloody 2012), received two post-publication awards, the Independent Publisher Book Awards Bronze in Poetry and the Devil's Kitchen Reading Award from Southern Illinois University - Carbondale. Her second book, HUMANLY, was recently released by Small Doggies Press. Her poems have appeared in Verse Daily, Baltimore Review, The Journal, The Offing, Indiana Review, Salt Hill, and elsewhere. She has an MFA from Cornell University and a BA from Albion College. www.stevietheclumsy.com
LEONARD KOGAN is an artist who lives and works in Baltimore, MD. Exhibitions of Leonard’s works include “Wall flowers” in Herzliya Museum, “The After Light” at the Andy Warhol Factory in New York, “SUR/FACE/S” at the Nexus Project Gallery in New York, a show at the museum of Yanko-Dada in Israel, “Project Diversity” at the Sputnik Gallery in Brooklyn and others. Leonard’s art has been featured in a number of literary and art magazines, often contributing to the covers. A publication in the Little Patuxent Review issue of “Doubt” features Leonard’s recent works and an interview with the artist.