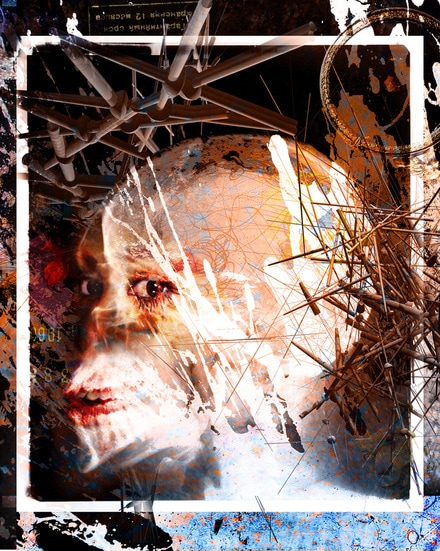 Live as if you are already dead. - Zen admonition

About the Dead Woman and the Invisible Man

One morning, the Dead Woman notices his jaw.
The skin is gone, and the soft tissue that formed his cheeks and his lips.
She can see straight into his head:
the springs and levers that work his jaw, the moving ramp that is his tongue, the reef of teeth.
She watches the uvular mechanism at the back of his throat where the electricity of his thoughts
changes into sound.
The Dead Woman thinks to herself, “He has been looking a little Edisonian these days. A little
filamentary in the eyebrows.”
Then, as if to extend the metaphor, she notices light shining from his head.
No, not from his head, but through his head where an entire section has been bored out.
She can see clean through him.
And still, he continues to talk.

More About the Dead Woman and the Invisible Man

“He speaks,” she marvels, “with such authority.
And yet, as I can see, his head is full of holes.”

Tamra Hays
After living in Spain, Italy, Egypt, and Turkey, Tamra Hays finally returned to Mountainair, New Mexico where she lives with her husband, her garden, her camera, and a supply of sharp pencils. Her most recent work can be found in Sin Fronteras/Writers Without Borders.
​Gary Nolan is a visual artist, photographer and programmer.  He currently works in support of the U.S. space program. You can view more of his work on flickr.