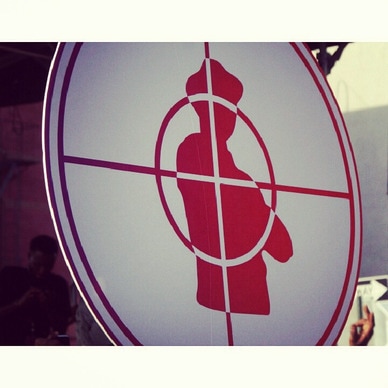 A Lesson from the Terrordome


Echoes of sirens blared while phrases
belted from the boom of Chuck D’s voice,
left imprints sinking into memory
that bob up when buoyant history
is necessary. The blast and thump
of “Welcome to the Terrordome” droned
intent with Flavor Flav’s clock swinging
on his neck, a manic shining searchlight
beaming from a Black Planet that still
embodies fear and chaos for some.

When the dancers marched and pivoted
in lockstep military formation in front
of a target with crosshairs imposed
on a black man’s silhouette, Chuck D
insisted to everyone in earshot come
on down. The sample’s rapid response
get down fired back, but the internal
rhyme in “the shooting of Huey Newton”
never left my head. It sent me, curious,
to a small, Midwestern library, before
internet searches streamed into houses.

So, my finger traced columns
in an antiquated guide to periodicals, flipped
through a card catalog’s long shelves,
looked for N’s, then Newton. Who was he?

When I clicked the microfiche onto spindle
and rolled through articles moving across
a white screen, squares of photos and text
rolled one frame at a time until the brief
article appeared--Black Panther found dead
in Oakland. I shook my head and silently
asked how much of the story is missing,
how I wouldn’t even know about the bullet
dropping Newton, if Chuck hadn’t told me.


Every moment sounded like smoky back rooms
and corners in Wicker Park still got Black before
dark. Jazz was like a tongue on your neck, finger
tracing collarbone. Incense, bidis, and chew sticks
looked earthier between full lips as substantial
as unbroken ciphers or bulging notebooks full
of curled pages springing with rhyme (and other
acrobatics found in our mouths) while seeking
some elusive word to replace violet, the broken
skins of blueberries, the sweat never concealed
by cigarette smoke, unexpected names when
silver terrarium shrinks into microphone head.

Amplification blooms into Larenz Tate playing
Darius the poet in his hometown, and the story
soon lands on Nina, played by Nia Long (Nia’s
daddy is a poet in real life). They woo, fuck, fight,
separate, and she returns to the small stage
circled by spotlight. She is a photographer
fresh from New York City in a perfect white
shirt. She wears smoked cherry pout. Her poem
rings in the heights of the everglades, and Darius?
He is silent, like the rest of the audience until Nina
heads to the exit. She tosses her journal in the trash
before palming the door, and he follows, pleads
wait and she looks back like women always do.

Before the kiss, he insists love is (more) serious than
a muhfucka. Nina is silent when their lips are clasped
again in a romance we waited for, now on television
on random nights. We sit through interruptions hawk-
ing soap, chips, and jewelry to think that love could
render familiar and still be slick, lit umber nights.
TARA BETTS is the author of Break the Habit and Arc & Hue. Her chapbooks include Never Been Lois Lane, 7 x 7: kwansabas, and THE GREATEST!: An Homage to Muhammad Ali. Her writing has appeared in POETRY, Obsidian, Callaloo, and several anthologies. She is a co-editor for the anthology The Beiging of America: Personal Narratives About Mixed Race in the 21st Century. Betts earned her MFA at New England College and her Ph.D. in English at Binghamton University. She teaches at University of Illinois-Chicago.