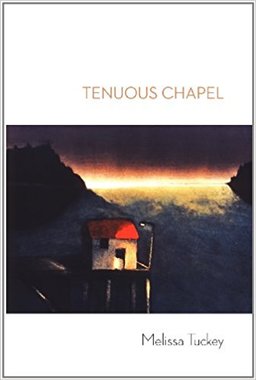 
Melissa Tuckey’s first book, Tenuous Chapel, is wide-awake with a reverent hush.  Her poetic voice is reminiscent of a chapel – unassuming, unashamed, sincere. Tuckey writes with a light touch, but her poetry is not lighthearted, like the “lightest sort of rain / one could drown in it without knowing;” her poems emanate life and light with a lull so sweet you could almost miss their power to disarm and drown.

The poetry in this first collection is collected and certain; it is confident - it need not be loud to be heard. In fact, it is perhaps strongest at its softest, as in “Lesson in Cuban Cooking.” This poem takes the form of a simple how-to. At first glance, it is just a recipe, but under Tuckey’s quiet mastery transforms into a poem of political and emotional depth.

The strength of this poem is in its language, which more than hints at its political focus. Tuckey’s verbs, especially, are politically charged with social commentary: lift the embargo, crush ice and mint, unify, distribute, etc. Even were this poem not about more than cooking, it would still be beautiful in its symmetry and imagery – one can almost smell the lime and mint and see the steaming rice in a bowl ready for a communal meal. But it is the layers of this poem that make it so special: the initial reading of preparing food and the warmth those images evoke, the repeated verbs calling readers to action, the social commentary within that illustrates the current state of affairs and provides instruction.

The force of Tuckey’s poetry is a strength that surprises; a collection of reflective observations and unassuming images, which, like the smooth surface of a river, belie their tumultuous currents of emotion, pain, awareness, and questioning. Questions are not feared here; there is no temerity in Tenuous Chapel. This collection features poems of many topics and feelings, all distinctly in Tuckey’s voice, but with style differing with subject. For example, poems about family members are more grammatically connected, while more abstract subjects tend to reflect that abstraction in their construction.

An excellent example of one such grammatically “connected” poem is “Late Anniversary,” a peaceful reminiscence, a reflection on a life lived together through beauty and pain. Tuckey begins with a simple observation, pregnant with emotion: “No one told me that joy could be / as quiet as rain, that a clearing beyond / the flowering trees could hold us.” She tells the story by continuing the thought: “To wander the woods with you / in muddy boots, to hear / the moaning of trees, to mourn their winter.” In this evocation of a journey, she uses grammatically connected phrases to create a contiguous experience for the reader to follow.
In contrast, for those poems whose theme is more abstract, Tuckey creates disjointed structures, making the reader work to find connections between lines and solutions to the riddles. Take “Ghost Fishing in Louisiana” for instance, whose images are grammatically disconnected, jumping from one subject to another even within stanzas. The third through sixth stanzas, especially, work like a list of facts or observations, evoking sensory images or feelings, but not creating any satisfying continuity of grammatical structure:

Her house held the cancer
like fish in a locked box”

The general effect here is that of something missing or messed up; the poetic structure mirrors its subject: the environmental brokenness of this town in Louisiana.

The smoothness and gentleness of Tuckey’s poetry can be attributed to her sensory images. Foregoing lengthy descriptions, shocking images, or flashy wordplay for brevity, sincerity, and clarity, Tuckey’s imagery is nearly minimalist. While “less is more” seems trite and a bit unfair, it is true that in Tenuous Chapel, it takes Tuckey very few words to pack a provocative punch. Much of the power in her poetry stems from her expert use of verbs, both in tense and word choice.

Tenuous Chapel is organized in three distinct parts, reading almost sequentially. This separation of parts is less like chapters and more like musical movements. This organization provides an overall flow for the tone of the book, not corralling similar poems together for the sake of organization, but rather moving organically from one poetic vantage point to another, crossing a wide scope of topics tied together with a unity of emotional experience.

The first section, “Testimony of Daylight,” deals in the physicality of life. Every poem presents natural imagery (dirt, trees, sunlight, etc.) with the exception of “Einstein’s Hands,” which still retains focus on the very physical aspects of humanity. With purpling skies and flashing rivers, stark light and moaning trees, the color of paint on walls filling a room, humanity is connected in these poems to the physical world. “Testimony of Daylight” illustrates the bigness in the little things – the significance of the great connection between humans and the things around them is seen in seemingly insignificant details: nail files and laundry, patent-leather shoes, a bowl of plums, and details of the human body – especially hands.

Tuckey’s voice in the second movement, “Rope as Witness,” shifts to one of outrage. Maintaining quiet dignity, this section moves beyond the circle of home, exploring violence and tragedy, examining foreign places in ways that make them near, and banishing the idea of evil as foreign by showing the evil springing from American soil. Tuckey depicts the sadness and pain of the world beyond our comfort zone as real and near by inverting the tactic from the first section and showing the significance of little things as part of the larger issues in life.

​Section three, “When the Giraffes Come,” finds the speaker generally back home with friends and family: in the garden, in the kitchen, surrounded by community. These poems deal largely with humans’ connections with one another, and the refuge that can be found in humanity and closeness. There is much togetherness in these poems – people impacting one another on a personal level, asking questions, experiencing the world in human ways, just being. These poems hit upon the power of being human and the ability we have as such to change life, not just for ourselves, but for others both near and far. The speaker’s voice, though returned to “home” carries with it the weight of experience and a depth of understanding which both comforts readers in their humanity and exhorts them to use that humanity to its potential. 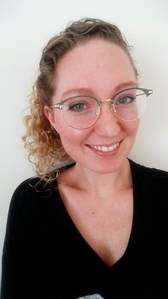 ​Caitlin Butler is a writer and editor living in South Carolina.