The Argonauts by Maggie Nelson 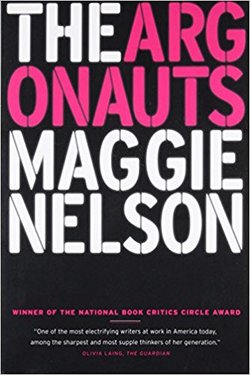 
​
Having read only one of her previous books, Bluets (2009), a much shorter and more lyrical piece of work, I approached Maggie Nelson’s most recent book with an odd sense of anticipation; would I find the same lovely combination of prose and poetry present throughout this book? The answer was yes, along with quite a few other stimulating goods and effects.

Described as a “genre-bending” memoir, Nelson sets out at the beginning of her book to discuss topics that are typically limited or obscured by conventional language and communication. Things such as sexuality, gender identity, and love are deconstructed and explored, and Nelson’s unwillingness to shy away from discussing sometimes difficult or obscure topics is arguably the backbone of this work. From discussing her darkest, most carnal urges during her pregnancy, to disclosing the details of her partner’s use of testosterone, to divulging the raw emotions experienced during the death of a love one, Nelson brings the reader very close and personal, to both herself and those she cares about. Can’t one who’s experienced the death of their own mother relate to Harry’s words during that moment in an inexpressible way?

“i kissed her all over her beautiful bald head and i said, “goodnight mama. you go to sleep.” and then i laid down in my little chair bed there and put my jacket over my upper body and silently cried myself to sleep. the sound of her breathing, deep and gulping and certain.” p.130

Perhaps the most “genre-bending” aspect of this book is the inclusion of outside information that is effectively mobilized to strengthen some of Nelson’s claims or ideas. There are many moments where Nelson will borrow a quote or excerpt from a notable philosopher or theorist. While the average reader might be unfamiliar with Julia Kristeva, Judith Butler, or other important philosophers and thinkers of the last century, Nelson makes this unfamiliarity seemingly redundant. The quotes and words of others are seamlessly embedded within her own body paragraphs, and the emotionally-driven commentary that follows is effective in applying theory and philosophy to her own life and the universal topics that are being discussed.

If there was ever something to admire about Nelson’s writing aside from it’s brilliance, it would be its alluring prose. The language throughout this book is both enchanting and haunting, with seeds of both ecstasy and sorrow buried between the pages. Her writing has a feel that is both poetic and punctual, and the slightly anapestic form of the book only emphasizes the beauty in some of the shorter sections:

“And then, suddenly, Iggy. Here he comes onto me, rising. He is perfect, he is right. I notice he has my mouth, incredible. He is my gentle friend. He is on me, screaming.” p.133

​When she finally gives birth to her son, Nelson’s body has emblematized the namesake of the memoir; Roland Barthes’ examination of Jason and the Argonauts, from Greek mythology, as they gradually replaced pieces and parts of their ship, the Argo, thus transforming it over time. As the transformative natures of the body, sexuality, and identity are explored throughout this book, Nelson develops a logically and emotionally-driven argument that emphasizes individuality, as far as thoughts and feelings are concerned, and promotes love above all else.
Hunter Jernigan is a graduate student at the University of North Texas working on a master’s degree in Creative Writing, with a focus in non-fiction. Much of Jernigan's reading and writing interests are non-fiction related, with memoirs being a specific interest.