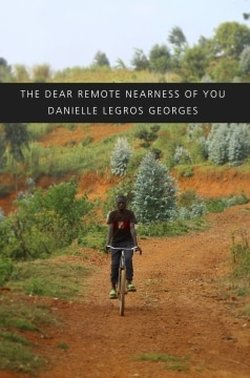 
In her poem, “Still Life in Green and Violet,” Danielle Legros Georges writes:

The black lily with its black heart juts out of the green
lettuce of the world, insisting on itself, asking for your eyes.

Jack in the Pulpit as black pearl. The inner heart of the body,
and less the body, seen from the outside.


The forty one poems in The Dear Remoteness of You insist that we look past the borders--the boundaries--of race, of nations, of skin to “the New maps. Blood through the flesh before it pours out of the body (“Instances of Blue”).” Legros Georges traverses broken countries, torn landscapes, and our ever-morphing selves, with steely language that flexes its muscles against imposed separations.

A native of Boston, and its Poet Laureate, Danielle Legros Georges searches for the right names for her city, “the good and bad of it.” “ . . . .A Puritan’s Beacon, Wheatley’s/Pen, Winthrop’s city upon a Hill, Walker’s Appeal to the Coloured/Citizens . . . (“Praisesong,”).” With the same linguistic arrow, she also confronts Boston’s racial unease. In “Poem from the Real World,” after being called a slur, the poet writes, “(I would have preferred negress,/more charming and belle-lettristique . . . .).” The names of things--countries, nationalities--become prayer-like in Legros George’s poems about her birthplace, Haiti. Just as she searched for the names of Boston, so does she try to capture the essence of this poorest nation by naming it.

You should be called beacon. You should
be called flame. Almond and bougainvillea,
Garden and green mountain, villa and hat,

girl with red ribbons in her hair,
books under her arm, charmed by the light
of morning, charcoal seller in black skirt. . . .

As the poet attempts to re-name, landscapes split like skin. In the horrifying dirge “Intersection” about the Haitian earthquake of 2010, Legros Georges repeats lines, shifting them as the poem progresses, forcing enjambment, making slight tense changes that signal a breaking open and apart.

So too, the body splits, becomes as cracked as the land, becomes the land at times. In “Egg,” she writes:

Then you would
travel through me, throat and entrails
to earth--to the body of the earth, becoming
more than you’ve even seen, more
than you’ve ever known.

I attended one of Danielle Legros Georges’ readings, and heard “We Eat Cold Eels and Think Distant Thoughts,” a poem that begins with the African-American boxer Jack Johnson “glistening like a fish.” The poems ends with the image of an eel in a tank:

Below its head, no body but a tail of fluid form, one great muscle
Behind ears that were not ears, but also holes. Its whole body
Beating a slow chilled rhythm that kept it afloat.

And a cool terror shot through me, as it watched me watch it,
As it followed me through the liquid wall that split our worlds,
And separated our species.

As Legros Georges read this, she raised one arm with ballerina grace and control, undulating it like the eel, while the other hand held her book. This dual motion epitomized the poems in The Dear Remoteness of You: the human form, amorphous as the land, searching for communication from one world to the other, and the other, who watches “you watch me” with “a fierce intelligence.”

With an obsessive need to define that which is constantly changing its boundaries, Legros Georges creates exquisite and terrifying poems in The Dear Remoteness of You. The voice that reaches out in the title poem “Across the space you seem/To pixelate a dream, a breakage/And a screen,” invites us in, if only to challenge: “Who is citizen enough? And who native?/Who other?” 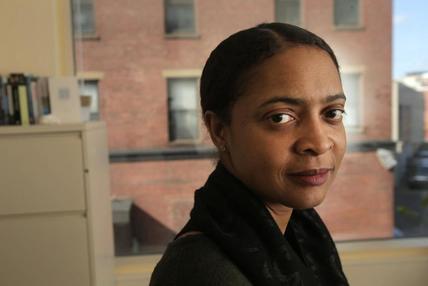 DANIELLE LEGROS GEORGES was born in Haiti and raised in the United States. She received a BA from Emerson College in Boston and an MA in English and creative writing from New York University. She is the author of two poetry collections--The Dear Remote Nearness of You (Barrow Street Press, 2016) and Maroon (Curbstone Books, 2001). She has received grants and fellowships from the Barbara Deming Fund, the Massachusetts Cultural Council, and the Black Metropolis Research Consortium. In 2014 Legros Georges was chosen as Boston’s second poet laureate. She is a professor at Lesley University and lives in Boston, Massachusetts.