Up the Staircase Quarterly
Search
The Landing: An Interview Series seeks to gain insight into the diverse creative processes of some of our favorite writers with the hopes that we can inspire others through this sharing. Each quarter we will highlight one previously published poem in a short interview. We would like to thank Fatimah Asghar for being our first guest. 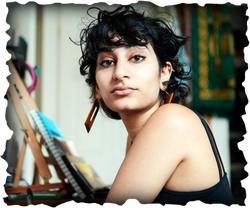 FATIMAH ASGHAR is a nationally touring poet, photographer and performer. She created Bosnia and Herzegovina’s first Spoken Word Poetry group, REFLEKS, while on a Fulbright studying theater in post-violent contexts. Her work has appeared or is forthcoming in POETRY Magazine, The Paris-American, The Margins, and Gulf Coast. She is a Kundiman Fellow and a member of the Dark Noise Collective. Her chapbook "After" is forthcoming on Yes Yes Books fall of 2015.
Poem: "Pluto Shits on the Universe" by Fatimah Asghar, published in Poetry.


Your preface to “Pluto Shits on the Universe” mentions how, in 2006, Pluto was re-categorized as a dwarf planet, but your poem first appeared in Poetry in April of this year. What catalyst in the interim inspired you to personify Pluto?

In the world of publishing, it can take a long time for a poem to get published. I had written this poem a few years before it appeared in POETRY, for the Encyclopedia Show, which was a variety show based in Chicago. Every month the show would have a new topic and you had to write a poem about that topic. That show's theme was “February 7th” and we all had a different year. Mine was 1979.

You begin and close your poem with the same line: “Today, I broke your solar system. Oops. My bad.” What truths are communicated in “Pluto Shits on the Universe”?

I think the major truth communicated is you can’t let anyone else define who you are. I think as a woman of color I’m constantly being told what I am, what I’m allowed. In many ways I see the poem as a response to broader society and, in many ways, Whiteness. Why does the world always insist on telling everyone what gender they are, and how they are allowed to express it? It’s stupid, really. If we are all allowed to be our full selves and hold our full power, that’s often outside of categorization. And being defiantly uncategorized and breaking rules is a real power.

Can you describe your process in determining how to give voice to Pluto?

At first I was trying to write this airy poem about how Pluto was hurt and all this stuff and the poem just wasn’t working. I couldn’t get it to spark and was deeply frustrated. So, in frustration, I wrote this poem. I showed it to my friend Jamila Woods, who was working on the poem with me and she was like this is the poem. And so we performed it as a group piece for the show.

How did you navigate using profane language and what advice do you have for poets with regards to using expletives in their work?

I’m interested in the way I talk. I’m interested in how that can be considered poetry. I curse a lot. I also believe in lyrical vulgarity. I learned that from Stephen Adly Guirgis’ writing, in particular his play, “The Motherfucker With The Hat.” I worked at Steppenwolf when we put that on, and the whole office was a buzz and so happy because it was breaking so many rules. People were excited because they got to put the word ‘Motherfucker’ in emails, because they got to say it in business meetings. There is such a joy with cursing that we deny ourselves a lot.

But cursing is an art. It’s not frivolous, it’s lyrical. Especially when you’re talking about treating someone. This poem is a shit-talk poem. It’s a no-one-can-touch-me poem. It’s a poem that sharpens its insults to points.

My advice for students is: write the way you talk. Write the way you hear people around you talk. If that means that you use swears, you use swears. If you don’t, then don’t. The other day I was teaching a workshop about home and we were talking about smells and one of the students was like “I can’t say my house sometimes smells like cat piss, because it’s inappropriate.” And I was like “YES YOU CAN.” And that changed the poem. It also changed the way that she thought about the rules of poetry, which can be so stiff. So, unstiffen the rules. Make it fresh, make it you.