THe  LAnding:  An  Interview Series 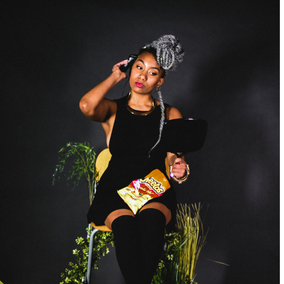 kiki nicole is a yung negro artist & poet currently based on the West Coast. Their work has appeared/is forthcoming in Rose Water Magazine, Medium, WusGood Mag, and Monstering Magazine, among others. They are a 2016 Pink Door Fellow, a 2016 Voice is a Muscle grant semi-finalist, and a Spring 2017 Cohort of Destiny Arts' Queer Emerging Artist Residency in Oakland. Find them at kikinicole.com.
Poem:  "On Gender" published in Wusgood Mag.

You begin “On Gender” as a sort of demand on the reader to construct a creation story, “name a ghost. / call it Girl. / name a body / or, / name a weapon. / say pussy.” In what ways did you wish to subvert or reconstruct the idea of a creation myth to allow for the creation of self outside of the western gender-binary? And, how would you describe the origin story of this piece for you as a writer?

I’m very interested in the creation of history & narrative. Who generally has access or resources to declare the history of themselves? Certainly, not I. My history goes back as far as a great-grandparent, and all that came before, I only know small details. A Black and Indigenous woman. An Irish rapist. The maybe in the middle & blankness of before. Started from Nowhere, now we here.  Diaspora sorta ruined the creation story as cultural cornerstone for my Regular Black existence. So maybe that’s just it. My existence is proof of my history & how else to make worth of that? My Westernized upbringing informs me to put it in writing, in a language that was forced upon me & yet, is all I know. How do you, then, reclaim something you never were even allowed to have? Be it a life or a gender or a body or a legacy.

Much like your poem, “venus as a boi: for colored femmes who have considered suicide/when no one wants to fuck them,” “On Gender” does not separate the nonbinary femme experience from blackness. In fact, your work seems to be working against the notion of separating experiences of the self, or that these experiences can even be separated. (This is something which immediately drew me to your work, as I myself cannot separate—for better or worse—my whiteness for my genderqueer experience in my writing.) How do you personally navigate which experiences to connect and incorporate together in your poetry?

Having various identities, I often consider myself to “contain multitudes,” in the words of Walt Whitman. My overall experience in being alive is informed by all of my marginalizations. That being said, I do not have the privilege to separate or to choose which aspects of my identity to give a voice to. They are always simultaneously speaking (again, for better or for worse.) For example, my blackness goes hand in hand with my lack of gender which originates from my lack of humanity regarding my blackness which informs my femme identity as someone expected and inclined to perform unnumbered accounts of emotional labor in exchange for some token of worth. It’s hard not to be intersectional when you are the intersection. Regarding my work, I never want to shy away from the lives my body carries. If I write a poem about a tree, I am more than okay with it being deemed “political,” or a Black Poem or a Queer Poem or a Crazy Bitch Poem or a I Have a Weird Chronic Illness Poem. There is no chosen route within that. I navigate with, not around, all of my experiences.

In many ways, with its fragmentation and slipperiness, “On Gender” lines up with a trauma narrative—especially here where the “we” can stand in for the speaker and their body or for the speaker and a broader group of misgendered persons—but for me, as a reader, “On Gender” seems to be usurping this conventional disjointedness and, instead of circling its fissures, points to them, “ghost[ing] while still inside this body.” What I love most, though, is that it also allows for escape from the body, and is ultimately a self-love poem. Who did you write this poem in conversation with? Was there anyone you wrote this poem for in conversation against?
​
Going back to the idea of creating undocumented narratives for myself, the “we” serves as both accreditation for my existence & acknowledgement of the dissociation of being black & un-present in this body & yet still hypervisual. In that sense, the poem is a conversation between all parts to someone totally outside of ourselves, a witness. A bystander whose history & body does not speak quite the same tongue. Someone who needs convincing. & this witness, though outside of the body could actually still belong to the body. Could be the body itself. This poem was written with the idea of creating a dialogue between the ungendered (black) spirit, who has always been here, & the gendered impermanent black body.

What advice do you have for poets who wish to confront the misgendering of bodies and institutionalized cissexism in their writing?

To ask for everyone’s pronouns & drink enough water everyday. To listen to trans folks about their experience over any cisgender person’s opinions. To really examine if it is your place to confront these things if you do not experience it. Read: Probably not. To not just confront these issues in their writing but in their daily practice. Make it ritual. To not regard things as a “misgendering of bodies.” To stop focusing on bodies that do not belong to them. To forget that the body has anything to do with gender. To recognize privilege. In my case, as an AFAB person, to stop making so much blk pussy references in art no matter how gender fluid the pussy is. To deliberately protect & serve & make room for any Black trans woman and/or femme, because there is no liberation without their liberation, first & foremost.