Up the Staircase Quarterly
Search
The Landing: An Interview Series seeks to gain insight into the diverse creative processes of some of our favorite writers with the hopes that we can inspire others through this sharing. Each quarter we will highlight one previously published poem in a short interview. 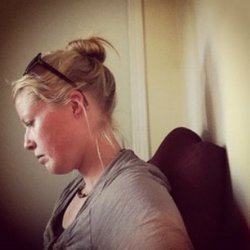 LISA MARTIN is the author of the poetry collection One crow sorrow (Brindle & Glass, 2008) and co-editor of How to Expect What You’re Not Expecting: Stories of Pregnancy, Parenthood, and Loss (Touchwood, 2013). Her work has won the Alberta Literary Award for Poetry, an IPPY award in the Parenting category, and a National Magazine Award for Personal Journalism. She teaches literature and creative writing at Concordia University of Edmonton, and is currently at work on a novel, intermittent essays, and a new manuscript of poetry. You can find her online at www.writerinresidence.ca.
Poem:  "If You Really Aren't a Racist Take This Online Test" by Lisa Martin, published in Rattle.


In the wake of outcry—first Beirut's tragedy being passed over for a more western Paris in the news, then the retaliating wave of outcry at the outcry—many pieces I read seemed more interested in laying judgment. In your notes about the poem, you write, “I’m interested in the ways we talk to one another about peace, about war, about justice. A lot of public discourse (on all sides) around these events lacks critical nuance and sounds to me like intolerant moralism. So this poem is, in part, a response to that as well.” What place, do you think, writing has in this conversation? And how does one approach writing responsibly about these topics?

I often feel that public conversations about complex problems can quickly become more focused on the speaker’s position—i.e. the speaker’s desire to locate herself on the “right” side of an issue—than on a more collaborative intent to seek the truth of a situation. I tried to get at something of this problem, a bit satirically, but also with gravity—and with some sincerely offered alternative postures—in this poem. Literary writing doesn’t always have to go at things directly, but can come at them obliquely or laterally, so it can create a bit of space where something doesn’t have to be right or wrong—a handy trick.

I think writing responsibly about these topics probably requires that a writer attempt to cultivate humility before the lived complexities of systemic inequity among human beings, as well as before the radical dignity of every individual’s lived human experience, no matter which side of this inequity they live on. This is not the same as believing that every way of thinking or behaving is equally legitimate. Rather, it’s the narrative writer’s honour of the basic fact and dignity of point of view, the practice of attempting to see the humanity of the “other” on the other person’s own terms. Not easy, but important, and potentially transformative. I think a good poem should feel like it has been working to listen just as hard as it is working to speak.

Rattle's Poet's Respond requires an immediacy with the news—the turn-around time for a poem to be written and then published is usually within a couple of weeks, if not much less. How did this prompt publication shape your writing and drafting of “If You Really Aren't a Racist...”? [If at all]

This poem came together in a very short time—a few days from start to finish. Publishing anything this quickly—and especially online, because of the potential for so many readers and such an immediate response—seems to me to produce a different kind of work, almost a sub-genre of work: something more like a very carefully held conversation than a poem, in some ways, or closer to slam poetry or improvisation, maybe. A form with advantages (e.g. relevance and immediacy) and disadvantages (e.g. missing out on the slow/long work of revision).

This poem, especially the first stanza, probably would have slimmed down given time. But would it still have felt as vital or been as interesting, later on? That’s the balance. Rattle’s Poets Respond is a cultural space for poets—the people whose role in the culture is to seek wisdom and fluency in equal measure—to actually speak up and be heard in a timely way. So Rattle has created a way for poets to influence our collective understanding of events as they unfold, our mythology. To publish a poem on Poets Respond is to be poet laureate for one day, one significant event: a cultural moment. How important to the poet, as well as to the culture, to have the work one does—if briefly—matter!

I don’t know if he is looking for evidence
of brutish truth or proof of his own flesh
or resilience in the face of it.

What were you looking for when you wrote “If You Really Aren't a Racist Take This Online Test” and did you find it?

I was looking for a bit of quiet inside of the noise, which I often am. In particular, with this poem I was looking for a place from which to hold together a lot of difficult fragments, and also to honour what is radically inalienable in principle if too often radically alienated in practice: our shared humanity. Every poet knows form is just as important as content. I wanted, in writing this poem, to make a plea for the way we hold these conversations to enact the ideals we say we are committed to: I/Thou instead of Us/Them, e.g.. Or, even more simply: Me, too. I think I did find what I was looking for, for myself, at least—some kind of peace and integration, a way of being with the difficulties at hand without ignoring them or thinking I can single-handedly solve them (a posture which seems to lead to aggression, including self-aggression).

The revision process, for me, is often about checking to see if the poem has really got a lock on something I was looking for, in the first place. Sometimes a poem finds something else I also want to find, instead. Sometimes it gets lost in language, or takes other detours.

What advice do you have for poets interested in writing topical poetry?

Oh, it depends who they are and what they want to achieve, what they’re interested in! But I guess I would say: pay attention and know what you think. Educate yourself about the things that most engage you. Listen to other people and consider things from their point of view. And get curious and interested about why you think and feel the way you do, about why other people think and feel the way they do. Read, read, read: long-form journalism, Facebook rants. You can learn from anything, anyone. But sometimes you need to turn down the noise and tune into your own, slowly-yielded understanding. Find a tree-line or a coast to walk along. Slow down. Watch the wilder creatures. Be silent. Return.