The  Landing: An  Interview  Series 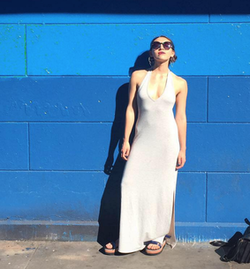 Sarah Sgro lives in Oxford, Mississippi. Currently, she serves as Poetry Editor for the Yalobusha Review, co-hosts the Broken English Reading Series, and reads poetry submissions for Muzzle. She is from New York and previously worked as an editorial assistant for Guernica. Her poetry appears or is forthcoming in DREGINALD, Cloud Rodeo, Tagvverk, Muzzle, TYPO, glitterMOB, Horse Less Review, Deluge, and other journals. Her website is sarah-sgro.com.
Poem: "I Wear My Man Out" by Sarah Sgro, published in Muzzle.


Several of your recent poems incorporate quite a bit of space between words, phrases, lines. In “I Wear My Man Out” you've opted for condensed additional space with supporting backslashes. How do you decide how much space a poem needs? What immediacy are you most interested in playing with here?

Though they manifest differently on the page, both backslashes and white space help dismantle conventional structures of meaning in my poems. I’m inspired by writers such as Heather Christle, Doug Kearney, and CA Conrad who sever visual integrity in order to craft fluid syntactical possibilities; for this preference, my friend Andrew Dally calls me Slippery Sgro. I tend to be more slippery in my space-heavy poems, but it happens here in lines like “i refuse to nourish / anyone in this poem”; “I” won’t gratify the reader or “my man” with any wholesome revelation, and I also won’t nourish myself, with food or healthy love.

Any sort of line break can create slippery syntax, but I’m specifically interested in how slashes and white space foster fluidity within the contexts of performativity and vulnerability. The implicit violence of the backslash asserts “I Wear My Man Out” aggressively on the page, reflecting my often unapologetic display of the grotesque (as in the speaker wearing her man like a “coat” and smearing his shit “in between my legs”). At the same time, the slash evokes inherent brokenness and instability, foreshadowing the collapse of the speaker’s apparent fierceness into vulnerable carthasis: “i won’t pretend to be a wolf / for the sake of this poem.”

In contrast to the backslash, white space explicitly conveys the physical and psychological vacancy central to my work. While dense poems like this one rush desperately to fill the prospect of a void, those with ample white space embrace absence directly. The decision to use one of these tools over the other happens pretty organically, but I think their co-presence in my body of work forms a complex interrogation of performativity: what it offers and denies the reader and speaker, and to what extent it cloaks more vulnerable aspects of the confessional.

In their spotlight of your poem “Body As a Plant Expanding,” Ploughshares noted a consistent use of “femininity, food, sexuality, and waste” in your work—all of the same qualities which immediately drew us to “I Wear My Man Out.” I caught myself wondering: would this poem be as sweet without shit? What do the base needs of hunger, sex, and human waste in a poem alongside femininity allow you as a poet?

With roots in the Gurlesque, my poems aim to subvert classical notions of the female body as a closed system bound to the natural world. By writing into the base needs you mention, particularly those regarding waste, I hope to reclaim the feminine body as a fluid biological organism inseparable from its larger ecology. In doing so, I’m committed to rejecting stale tropes that glorify femininity as a site of purity while fetishizing nature as a monolith which privileges trees and sky over the human body and its byproducts.

Obviously, it’s fun and startling to write about poop, but I’m not interested in embracing filth for its own sake or for shock value. I’m fascinated by shit in a material sense: what it can tell us about identity and place, how it is repurposed as fertile matter, the ways we talk about and manage such a leaky thing. While I’ll always be a solid waste girl at heart, I’m moving towards different imaginings of ecological fluidity and the grotesque in my latest work, namely those regarding motherhood and fertility. Still, this new imagery demonstrates more of the same fixation: birth, like excretion, is a type of expulsion which blurs the distinction between body and byproduct, innermost and outermost.

Poetry is full of “I am's” and self-mythologizing. Few other vehicles provide the same opportunity to invent or reinvent the self, wherein the poet becomes powerful by making herself powerful in verse. Here you do traverse an unencumbered fantasticism detailing how you wear your man as a coat, but do not define yourself or your purpose. You write, “i won’t pretend to be a wolf / for the sake of this poem / i refuse to nourish / anyone in this poem”. What urged you instead to create power by withholding definition?

Wow, I love this question—it’s not something I’ve thought about specifically in these terms before. I’m certainly interested in the assertion of self through poetry, but I’m also drawn to disembodiment and the ways in which poems can obfuscate coherent selfhood, manifesting bodies and identities as “strange borderlands” (a phrase borrowed from the Gurlesque). In this specific piece, I thought a lot about the development of fluid identity between intimate bodies, the sort of psychological and corporeal interdependence that takes place in books like Sarah Gerard’s Binary Star and Alexandra Kleeman’s You Too Can Have a Body Like Mine, which I was reading at the time. If I had to pull out the thesis of the poem, it’d probably be “I’m just saying I desire any coat / he can give”: basically, two depleted bodies—intertwined on various physical and psychological levels—are seeking any possible warmth from each other, warmth that they probably aren’t capable of offering.

Overall, I think the power crafted by withholding definition here is double-edged. Lines like “i won’t pretend to be a wolf / for the sake of this poem / i refuse to nourish / anyone in this poem” perform authority while also exposing its lack; to refuse or to assert anything is to wield genuine power, but in making these statements, the speaker simultaneously departs from her ostensibly “wolf-like” display of ferocity. The most prevalent refusal in this poem is probably the refusal of intactness, with regard to identity, form, personal relationships, and interpretative possibilities.

What advice do you have for those who wish to employ this power of refusing identification in their own work?

I recently heard Morgan Parker talk on the Poetry Gods podcast about the multiplicity of voices that emerge in her poems, voices which sometimes feel inconsistent or contradictory, and how this is actually a wonderful thing—how it reflects the multiplicity of voices that surface in our own daily consciousness. I think this is a powerful way to approach the refusal of static identification. My related advice would be to embrace fluidity with respect to all aspects of identity, to write through different voices and headspaces, to continue pushing on fixed representations of constructs like gender, sexuality, and even linear conceptions of time. This is the stuff that’s exciting, the stuff that’s nuanced, the stuff that engages most authentically with our ever-shifting lived experience.