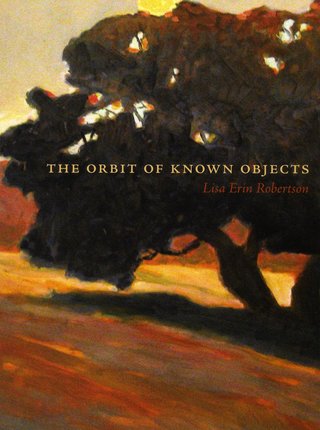 The Orbit of Known Objects by Lisa Erin Robertson


Naming a book of poetry can be a tricky endeavor.  If a poet chooses from a title in her collection, which one will be emblematic of the book in its entirety?  By recognizing that there is an orbit of known objects, Lisa Erin Robertson implicitly suggests that there are other orbiting objects with trajectories that are unknowable and unpredictable. These orbits, known and unknown, present the various paths upon which Robertson traverses in her first book of poems.

Robertson employs a vivid narrative throughout The Orbit of Known Objects that delineates a collision course between history, family, and circumstances.  Her poems employ long sentences that often extend across stanzas; at times, one sentence will run the entire length of the poem.  Robertson builds line upon line, sometimes with straightforward declarations and observations, other times with ironies and understatements that create tumultuous (and breathless) juxtapositions. Because of this structure, it can be difficult to excerpt Robertson’s poems. These pieces evoke a logic meant to be followed from beginning to end, much like the logic of scientific reasoning--except that she’s tackling emotions, illogical and unscientific by nature, but with an internal, subjective logic.

In The Orbit of Known Objects, Robertson draws upon her family’s history, the untimely deaths of her parents, their illnesses and misfortunes, as well as geology, entomology, and her own marriage. Throughout, Robertson demonstrates a keen ability to conjure atmospheres that are nearly Biblical in scope. For example, in the “Hundred Year Flood,” her father laments a malady visited upon the women of his family, including his own daughter: migraines.

. . . What could have gone
either way would now go
the old way,
the way of his mother, and her mother,
all nursed on laudanum and murder-ballad
lullabies, the damned matrilineal lot of them,
who understood with a blood understanding
how we needed dark rooms and frozen
water and fortitude enough to understand
that life would be long,
and we would spend it alone.

In contrast to the emotive language above, in other poems, readers may note a precision with which Robertson describes and interprets the natural world that inhabits her writing.  Her parents were scientists who made forays into the desert, daughters in tow, and they bequeathed upon her and her sister the ability to recognize, observe, and name plant and animal life.   In “Arroyo Seco”, she writes:

Did you see, as we left, the small
moths on the siding, under the exterior lights?
Geometrids, they fly overland from the creek
bed behind the motel.  The whole of the Mojave
is their oyster,
and still they land here.  Talk to me
some other time about making better choices.

It is Robertson’s deft balance of language—intuitive, observant, regretful, angry, insightful, and also, darkly humorous--that illuminates this intelligent volume. She not only captures the moments of loss and disappointment, but also acceptance, transcendence, and exhilarating beauty:

. . .to the desert and to the mineral
palace of my grandmother, her bedroom cavern
aglow with silver and gold, diamond
like a good clear liquor, ruby like
pulse through the lips, and pearl, especially
the pearl, which my father had reported
were condensed tears, minerals ascended
to heaven and cast down by
condensation, to be worn by unwitting
women who brought upon their bodies
expensively tactile sorrow.

The Orbit of Known Objects presents a world, poorly made and populated with imperfect people.  Robertson knows and understands this world and has skillfully captured it through unstinting observation, brilliant language, and generous imagination.


Q & A with Lisa Erin RobertsonMargaret Stawowy:  Tell us how you came to publish The Orbit of Known Objects.

Lisa Erin Robertson:  The Orbit of Known Objects was published by Sixteen Rivers Press, a California-based poetry collective. It was accepted for publication in 2013 and published in 2015. It was really an amazing experience. Sixteen Rivers is a collective, and so writers are involved in all steps of the publication. I learned so much more than I expected- about editorial components, and also about the business of publishing.

MS:  When putting the book together, how did you decide the structure of the book?  What considerations went into the order of the poems?

LER:  That is an interesting question. I wrote many of these poems in the same time period, and so maybe the sequencing came together organically. I didn’t, at the time I submitted the work, expect for there to be a geographical theme to the book, but by the final edit, this was a central theme for me, and I found myself removing poems that didn’t quite work with that theme. I don’t know if I would say that I realized I was doing it, but when Murray Silverstein, another Sixteen Rivers Press member who summarized the book, also noted the geographical theme, it was clarified for me. Sometimes a careful reader can do much more than a writer’s attempt at sequencing- that was another lesson I learned!


MS:  The subject matter of the book concentrates on major life events such as birth, marriage, illness, death, and dissolution and terminations in various contexts.  Can you speak to any of the events, or perhaps, collectively to all of the events, that shaped the poems in this book?

LER:  Yes, I can speak to that, although from circumstances that I don’t think I would particularly recommend. Most of the poems in the book were written during the time after my parents died, and various other significant losses happened in my life. It was a time in my life when change- very uncomfortable and often sad change- was ubiquitous, and so I don’t, just as a matter of where my thoughts were, know if I could have written differently.


MS:  And now, I would also like to ask about the role of science in your poems.  You have a scientific background, and, as we can surmise from the book, your parents did too.  How does this influence your creative process in your writing?

LER:  My father was an entomologist, and my mother spent a lot of time working with, of all things, lichens. Growing up, my sister and I spent a lot of time camping with our parents in pretty remote places, and our parents made sure that we knew everything about the natural history of those places- the geology, the botany, especially the insects. I can’t say that I always appreciated it at the time, but of course, now I have a different perspective. When I write, sometimes I feel like my brain is addled with science- it is difficult for me to look at anything, a rock or the course of an illness, and not see some analogy in biology.


MS:  When creating a poem, tell us about your process.  Does revision play a big role in your work?

LER:  Revision played a big role- I think that the really generous editorial schedule- I had two years between the time the book was accepted and the time it was published,- gave me a lot of time to think about the poems. Many of them look completely different from their first iteration. I don’t know if that is always necessary – although I know many people would say that it is.


MS:  Do you create other literature besides poetry?  Does that inform your poetry writing?

LER:  I have tried to work in longer form pieces, but I really appreciate poetry, and the economy of language necessary to work in poetry. I think it curbs my natural tendency to ruminate, and it is refreshing for me to think, however briefly, in that way.


MS:  Which writers or teachers have influenced or assisted you in your writing?

LER:  I am endlessly grateful for the work of Edward Falco. Sabbath Night in the Church of the Piranha is a volume of short stories that I keep going back to, after I don’t know how long. I am always trying to figure out how he works with ideas and plot, especially in some of his shorter prose pieces. I also, a few years ago, had the tremendous luck to be able to hear him talk about writing, and some of the direction and feedback that he gave me was really instrumental in the hard work of putting this book together. And of course, it is nothing that I can specifically recollect or really articulate very well now, which I am beginning to suspect is the way that these things work in general. 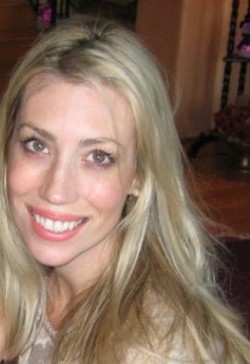 ​Lisa Erin Robertson was born in Sonoma County. THE ORBIT OF KNOWN OBJECTS (Sixteen Rivers Press, 2015) is her first full-length collection of poems. She lives with her family in Northern California, where she has worked in public health for many years.