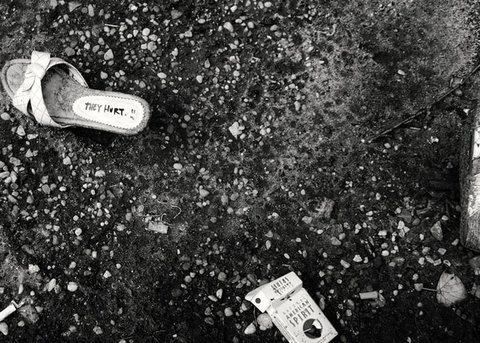 
My mother tried explaining when I was nine.
She told me they had been tired of fighting
their failing bodies, Grandma had wanted to go
together but he wouldn’t. Two months later
she died in her sleep and he was alone.
He changed his mind.
My mother mentioned something
about suffocation. For years I imagined
the will it took for him to repress
his body’s survival instinct,
the way he must have watched clear
plastic grip his face, knowing how easy
it would be to lift his hands
and tear the slightest hole.
But he was only thinking, wanting
to be with that woman
who proposed to him at twenty,
who bore children marked
with his cheekbones.
I liked that version better than the truth
I got when I was eighteen –
the shotgun, the brain with those memories
peppering the sofa
they’d made love on
in 1953.
Thea Robin Engst received her MFA in Creative Writing with a focus in Poetry from Emerson College in May 2012. She has been published in Sugar House Review, Gutter Eloquence, and Runaway Parade. Thea supports herself as a bar manager in Somerville, MA and is at this point, at least 30% whiskey.
Kristin Fouquet photographs and writes from lovely New Orleans. Her photography has been widely published in both online journals and in print: magazines, chapbook and book covers, and CDs. Her preferences are fine art photography, street photography, and the occasional portrait. Visit her virtual abode at the web address http://kristin.fouquet.cc