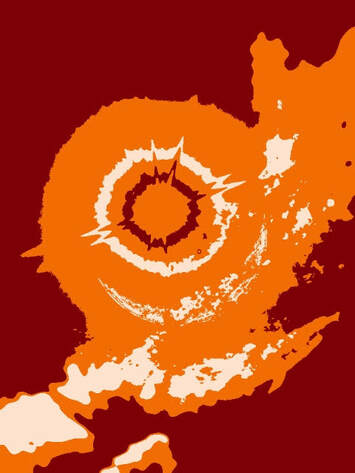 Tonight I am pressed up against a wall at a party.
Dressed down into a promise
I don’t want to make. I don’t feel sexy anymore.
Today I saw a seagull, killed
by a hawk on the beach.

Her skin pink under the feathers. Exposed like a larynx.
The veins in a neck so easy to snap.
I thought of wedding dances.
Men with knives, twirling a broken bride.
The way we hunger ourselves open.

The way the hawk looked up when I watched him
Eating from a dumpster. Scavenger-sad.
Humiliated by hunger. The gull cried. Her yellow eye
Rolling towards me.

I almost stepped forward, but instead
I made myself stand still as he tore her throat open.
Organ exploding pink as pornography.

It almost suffocated me to see things so clearly.
The body, mostly dark spaces. Soft interiors.
A woman’s body, where it is split at the center,
Like a centerpiece, a lounge, dark room
Where people go to drink strawberry martinis
And slide their hands up a stranger’s back,
Saddling up aside them on the sickly leather seats.
How have I not realized this for so long,
How the headless seagull looked like a sex toy?
A flesh light?

In the background of this memory another seagull pecks
At the body of a starfish. And the starfish places its whole wet, red stomach
Over the body of a clam.
​
Nobody is coming to save them.
I am not coming to save them.
This is the season of hunting, of helplessness
Of knowing the limits of my power,
Which kind of animal I am not.
Which of these two animals I am.
Tresha Faye Haefner’s poetry appears, or is forthcoming in several journals and magazines, most notably Blood Lotus, Blue Mesa Review, The Cincinnati Review, Hunger Mountain, Mid-America Review, Pirene’s Fountain, Poet Lore, Prairie Schooner, Radar, Rattle and TinderBox. Her work has garnered several accolades, including the 2011 Robert and Adele Schiff Poetry Prize, and a 2012 and a 2020 nomination for a Pushcart. Her first manuscript, "Pleasures of the Bear" was a finalist for prizes from both Moon City Press and Glass Lyre Press. It is still looking for a publisher. Find her at www.thepoetrysalon.com.
Márcia Tannure is a visual artist, born in Belo Horizonte, MG, Brazil. She started her artistic practice when studying porcelain painting. Later, she studied observation and artistic design at INAP / MG. She graduated in Social Work from PUC-Minas with a postgraduate degree in art therapy from Projeto Terra / MG.  Some years later she moved to Rio de Janeiro / RJ, where she studied Sculpture at the School of Fine Arts of UFRJ. At the visual arts school Parque Lage she studied contemporary art and exhibition design. She currently lives in Niterói / RJ, Brazil, where she develops research in fire arts and has great inspiration from nature. You can find her on instagram: @marciatannure