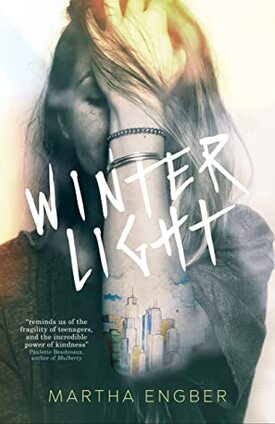 Martha Engber’s novel, Winter Light, is a superbly realistic invitation into a chilling urban landscape. A period piece set during the bitter Chicago winter of 1978-1979, we are dropped squarely into the rough, fifteen-year-old life of Mary and all the nervous teen energy orbiting her as she maneuvers for survival.

Mary’s loose gang of friends are what you’d expect--maybe. They endure the school day, party when they can, and try to score drugs and booze every opportunity. They hang out--which typically means doing little more than ragging on each other. Occasionally, they flirt, and occasionally that flirting leads to sex. But if this sounds something like your own adolescence, that’s because Engber doesn’t shy away from any of her characters’ flaws--least of all their unoriginality. And it is the author’s very refusal to manufacture intrigue that makes her characters genuinely interesting: they share more in common than the usual teenage angst and the confusion of the late 1970s; these kids struggle in the peculiar, different ways all kids in unhappy families struggle, dealing with decisions the adults around them actively--and inactively--make about their lives. Of course, all the while they’re aware that some don’t struggle half as much, and therein lies the heart of their conflict.

Thus, class struggle, jealousy, and a general lack of empathy all swirl about in that great mixing pot most of us remember as the disaster of public high school. Yet, even when nothing particularly dramatic is happening, Engber’s characters must still confront their hometown streets and boring weekends whose sheer tedium feels like it might grind them into a paralyzing depression. This spell of teenage ennui is only broken when a newcomer enters Mary’s social circle through a shaky cross-class alliance between her and a “prep” named Kathleen. Kathleen has the life Mary only wishes she enjoyed, and this outsider’s impression is only strengthened after she steps in to stop a fight between Kathleen and one of Mary’s other friends. For once, Kathleen is willing to see Mary as more than an undesirable, and subsequently, the girls are repeatedly drawn together and pushed apart in curious ways over the course of the novel, often because of their respective faults, sometimes through no fault of their own:

[Mary] stared at Kathleen. The snow between them like white noise made of silence. They both knew the hierarchy. Preps. Jocks. Geeks. Burnouts. A social strata
similar to the geological one Mr. Van Dyke talked about last year in earth science. How one layer presses down on the previous one, with new layers added all the
time with neither pause nor mercy. Eventually the weight grew unbearable and squashed varying sediments together into inescapable rivers of grit. Mary and her
crowd comprised the very bottom layer. The shittiest place to be stuck, the weight so heavy you can’t escape.

Moreover, to understand these young people is to understand their struggle, and crucially, Engber manages to build the physical place and the mental space we need to exist shoulder-to-shoulder with Mary. Like so much of Martha Engber’s writing, the author packs untold amounts into only a few lines, as in “[Mary’s] stomach rumbled. She took another drag on her cigarette, because that’s what you do when you’re so hungry you want to throw up. She’d long ago discovered tobacco did for nausea what Raid did for a cockroach. Kills. It. Dead.” Here we quickly learn a lot about Mary’s circumstances, such as that there’s not a lot of food sometimes, she’s a young smoker, and there are bugs where she lives. When X happens, turn to Y and Z--and as a result of this economy, Engber is able to construct truly rich, dynamic characters whose lives seem as familiar to us as our own.

Finally, adding to the overall tone and ambiance of the novel, Engber nails that staccato internal voice of a teenager needed to take the story seriously. We’re constantly in Mary’s mind, seeing life from her perspective, even as Engber floats subtly between perspectives, dancing from empathetic narrative to the observations of a detached, third-person narrator. For instance, when Mary’s taken on a late-night ride to a “party” that’s nothing like a party at all, we’re told,
“He led her through a room so big the space couldn’t be just one apartment. The walls of all three apartments must have been knocked down to make one room. Butcher paper covered the windows. People lay on mattresses and cushions, cigarette smoke curling in the purple light. Nobody danced, ate, or talked. A drug den, then, and Jesus.”

Suffice it to say, with so much to love about this novel, when it ends on a genuinely hard-fought redemption for Mary the payoff is rare for its believability amid today's glut of teen-lit brain candy. Rarer still, Winter Light is so well-written that it transcends easy classification as a "YA novel," offering something for the kids, yes, but also the kind of edification even mature adults can latch on to.
Phill Provance is the author of the poetry collection A Plan in Case of Morning and the chapbook The Day the Sun Rolled Out of the Sky, as well as the nonfiction popular history, A Brief History of Woodbridge, New Jersey. His poetry and prose have appeared in or are forthcoming from numerous publications, including The Baltimore Sun, The Cimarron Review, The Crab Creek Review, Cricket: Spider, and many others. Among his honors and awards are grants from Poets & Writers and PEN America. Before receiving his MFA in Poetry and Fiction from WV Wesleyan, he completed his BA at Bethany College and Oxford University, and presently he is a student in The Program for Writers at the University of Illinois, Chicago.