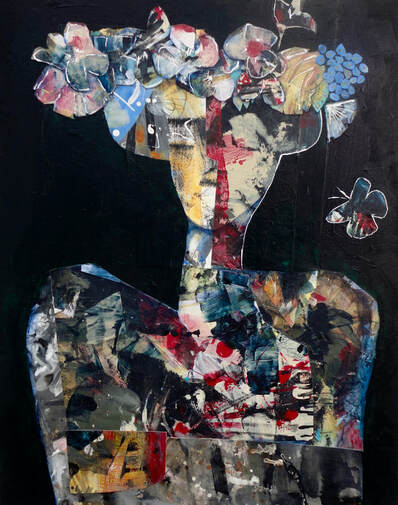 A Greeting to a Possible Lover

I will climb the hill to their house. The dark
will gather me away from the light of the street.

I’ll kick the porch stoop while the moths swim, dizzy.
They’ll take their time getting to the door. I’ll wear

a hard, brown halo into the grass around the yard.
They’ll have just driven home from Boston, in a rented truck.

They’ll have slept in the cab at a rest stop. They’ll laugh
as they slip their hands around me. Their teeth

​will be little bricks of snow in my mouth
or the blue light from the oven, burning.
Funeral for Now

There’s no movie at the drive-in
so they play the rain instead.

Weather on a white screen.
We drink stale beer. I remember

you supine, your limbs pretty drift-
wood on the beach of the bed.

In the cramped car we keep far apart.
I call you sister. Your eyes two damp

pools in the clearing of your face.
We have less than we’d imagined.

Less than we thought we’d have
by now. We’re moths whose

antennas are kept cut, to stop us
flying into lit wicks, thinking moon.
WLS (Wendy Lee Spacek) is a poet. She earned her MFA in Creative Writing from Indiana University Bloomington. Her first book, Psychogynecology, was published by Monster House Press in 2015. Her work can be found in print and online at poets.org, The Portland Review, deLuge Journal, and TL;DR. She has received two Vera Meyer Strube Academy of American Poets Awards, a Guy Lemmon Award in Public Writing, and the Katharine Bakeless Nason Scholarship to the Bread Loaf Environmental Writer’s Conference.
North Vancouver, B.C. Artist, and Author Jenn Ashton has lived a creative life that has encompassed everything from farming to the Boardroom; from BC to Harvard and back again. Coming from an artistic family she has brought a creative flair to all her projects large and small. Jenn is known for her originality, resourcefulness, and vision.  JennAshtonArt.com