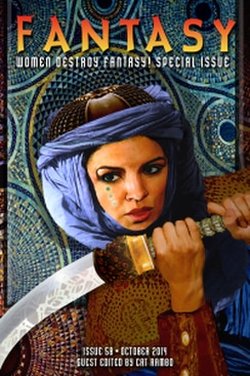 
For Women Destroy Fantasy! (WDF!)--a special issue of Fantasy Magazine--everyone who worked on the publication is female, from Cat Rambo, the guest editor, to Elizabeth Leggett, the cover artist. The issue includes original and reprinted fiction, a novel excerpt, nonfiction, as well as a suggested reading list of female fantasy authors and interviews with the contributors. The featured authors use their self-awareness of the fantasy genre to offer hope to women that their stories have meaning and should be told.

The theme of hope begins with H.E. Roulo’s original fiction “Making the Cut.” Roulo writes a superhero story critiquing the predominant superhero culture where female heroes are only white, big breasted and slender. The hero Vixen seeks to recruit Aisha to become a superhero alongside her, but Aisha believes she’s not fit for the job. In Aisha’s eyes, female superheroes are ‘“all alike—perfect. They fly. They have round eyes, straight hair, and clear skin.”’ Roulo draws attention to the lack of superhero diversity, and writes a story of women coming together to discover their own strength and redefine what it means to be a hero.

Redefining a familiar story also occurs in T. Kingfisher’s Cinderella retelling “The Dryad’s Shoes.” The most compelling aspect of Kingfisher’s work is that she keeps a self-aware wit throughout. Hannah, the protagonist, leads a Cinderella life: dead mother, remarried father, stepsisters. But when an enchanted titmouse sends dresses from the Dryad tree, Hannah decides she wants nothing to do with balls or princes. All she wishes to do is garden. The story is fun in every way I had forgotten fantasy could be and by the end, I was willing to believe in hope and happy endings.

The reprinted fiction also draws upon hope for a better future. Delia Sherman’s “Miss Carstairs and the Merman” follows Miss Carstairs, a naturalist scientist, who discovers a merman and holds him captive for study. Sherman’s prose relies on scientific language yet still remains accessible. But Sherman’s greatest accomplishment is the lore she creates where mer-people speak through images relayed through telepathic communication: “sunlight through clear water was laughter; a moray eel, heavy, hideous and sharply toothed, was grief.” Sherman spins her prose to offer insight into how, through expanding the realm of language, we can achieve a more compassionate and empathetic world.

The novel excerpt from Tina Connolly’s Silverlight was probably the most disappointing element of the issue because it didn’t offer new insights. Dorie Rochart wishes to pursue a field assignment at the Queen’s Lab yet Connolly splits the focus between Dorie’s motivation and her beauty from her half fey heritage. “[Dorie] knew what she looked like […] Blond ringlets, even delicate features, rosebud lips […] she woke up every morning with her hair in careful, silken curls.” Though perhaps Connolly sought to subvert stereotypes, the focus on Dorie’s beauty did not read as a progressive reinvention. Within an issue of diverse women writers and women protagonists, one more pretty blond heroine can easily be ignored.

The nonfiction returned to new explorations of women’s voices. Interviews with fantasy illustrators Julie Bell, Julie Dillon, Rebecca Guay and Elizabeth Leggett, as well as interviews with women writing tie-in fiction (like Dungeons and Dragons novels) create a well-rounded look at all the ways women are active in fantasy. In addition, the critical essays are accessible for those of us who did not graduate college with an English literature degree. Kameron Hurley’s essay “Language and Imaginative Resistance in Epic Fantasy” stands out the most. Hurley argues for opening up our definition of epic fantasy so female writers are included. Her answer to how she includes female authors is one of the defining moments of this issue: “I don’t just write stories,” Hurley says, “I create new narratives of the way we can be, of the way the world can be. Are you with me?”

If you are with Hurley and believe women deserve recognition in fantasy, WDF! provides an extensive reading list of more female fantasy writers. The recommendations come from award winning female fantasy authors themselves, as well as the contributors to WDF!  The issue wraps up with interviews with the contributors on how they created the stories WDF! published. From start to finish, WDF! values the work of women in fantasy.

WDF! invites readers to fly along with female fantasy authors on the road to publishing equity. The pieces in this issue are fun and hopeful while still balancing serious topics. As reprint editor Terri Windling says, “each tale subverts the expectations of fantasy and of ‘women’s writing’ in delightfully sly and skillful ways.” WDF! displays what women are doing today in fantasy and that there is hope for an inclusive world in the future. 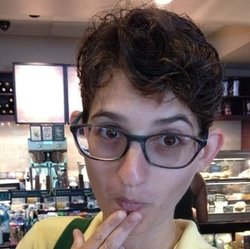 CHERYL WOLLNER is a feminist blogger as well as a reviewer at New Pages. Her work has been featured or is forthcoming in GNU, Voices and Visions, The Southern Tablet, The Best of Loose Change Anthology, Wilde Magazine, and others. She currently works for AmeriCorps and is the blog managing editor for Luna Station Quarterly.