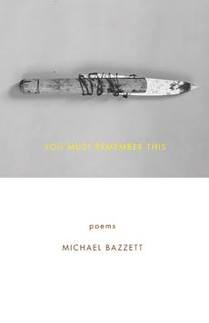 ​You Must Remember This by Michael Bazzett

The scene is so clear it might be a memory.

But no. It is too clear for that.

from “A Woman Stands in a Field”

Winner of the third annual Lindquist & Vennum Prize for Poetry, You Must Remember This has a wildly imaginative, damp Midwestern feel. Objects and bodies are broken down, and often misconstrued in their remaking, to be both vehemently surreal and morbidly human. Much like a short story connection, each poem in Michael Bazzett's first full-length collection, with varying degrees of realism and myth,  reads as a well crafted narrative.  In “Cyclops” Bazzett gives a flavorful, but traditional retelling of Polyphemus versus the one-eyed giant, whereas in “Atlas” the reader is mysteriously led “into the room with the blind man” and given an atlas “replete with indexes, charts, and translucent/overlays that display your various organs, followed by veins/and arteries traced in red and blue, and then the delicate lattice/of nerve endings that lace your body.” It is a whimsical twist at the end of “Atlas” which allows you to recover from your deathbed.

Demonstrating his voice's range, Bazzett reacts to literary giants in his second section. The narrator's romance in “September Picnic” with Saul Bellow's Herzog is sensual and delicious; his retelling of the text first person and immediate:

Pears from the open-air market
overripe in a damp brown bag.

The fragile leather of their skin
spiraled from the horn-handled
knife in grandfather's hands...

A nostalgic tribute to:

...a book that I read and never forgot
and now, yes, I remember the pears. I can taste them,

even, after all these years that never passed
between me and that honeyed moment.

A poignant poem any bibliophile can relate to, “September Picnic” is closely followed by the similarly smart “Lions” in which Bazzett embellishes on Ludwig Wittgenstein's declaration, that “if a lion could speak, we could not understand him,” philosophizing that

The problem, Bazzett surmises, would be something much quieter: the “telling silence for sleep.” His dark elaboration on Wittgenstein's famous proposal is tellingly grim of the collection. A twisted glee more easily detected in “The Crisis” a financier enters a roomful of full-figured women in lingerie. “It seems we were summoned here specifically for you” they tell him, unable to remember life prior to this room, unblemished as dolls. “Unbroken.” Continuing his sinister trend, “Elpenor” tells not the death of the Odyssey's youngest crewman, but rather the keen moment of denial Elpenor has after, crying “Wait! I'm here. I'm still here!”

The third and final section allows Bazzett's creepy narrative to really stretch and become cinematic. In “Book of ______” the narrator is strongly depicted as something alien, beastly charming, wily. I'm sure any reader would be tempted to let him out of his cage. As destructively, “The Professional” cleans house, emptying anything which causes pain, much like Eternal Sunshine of the Spotless Mindmeets a child horror movie trope.

Overall, You Must Remember This does not have a specific lesson to tell. There is no “This” specifically to remember. Rather, while these poems range from snidely ironic to stillingly candid narratives, it is the overwhelming damp feel of the collection, the normalcy of its darkness and Midwestern feel, which binds it together. The This to remember becomes more elusive. Perhaps this is simply a reminder to remove the rose-colored lenses, or perhaps this is as he writes in “Binary”:

...the world
is not in love with certainty.

What's certain is Bazzett wants the reader to render his or her own conclusions. This open-endedness to interpret more abstractly in feelings than fact will appeal to many readers, but perhaps frustrate others seeking less evasive meanings. Emblematic to the collection, You Must Remember This concludes with a laconic God:

He just looked at me.
That was when I knew.

In an interview with The 22 Magazine, Bazzett elaborated on his narrative style. “The innate architecture of the form offers a lot of scaffolding to play against, and I enjoy the unexpected. I mostly write to see where the poem is going to go. If the poem is a dog nosing down the alleyway, the narrative structure is the grid that ordained the path, or the asphalt of the alley itself.” As a reader, showing up at the beginning of one of Bazzett's poems blind, like a well-trained dog, each poem faithfully acts as its own guide. But You Must Remember This is true to its namesake; its not simply a passive read. These dogs have some teeth. These dogs know a few good tricks. 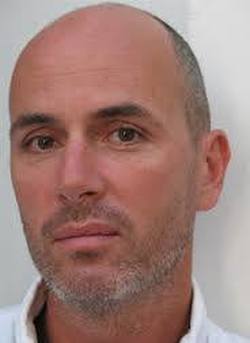 A finalist for the 2013 Lindquist & Vennum Prize for Poetry, Michael Bazzett’s poetry has appeared in Hayden's Ferry Review,Best New Poets, Pleiades, 32 Poems, and Ploughshares. His chapbook, The Imaginary City, was published as part of OW! Arts Chapbook Series and The Unspoken Jokebook is forthcoming. You Must Remember This won the third annual Lindquist & Vennum Prize for Poetry, an award given to a poet residing in North Dakota, South Dakota, Minnesota, Iowa, or Wisconsin.
​