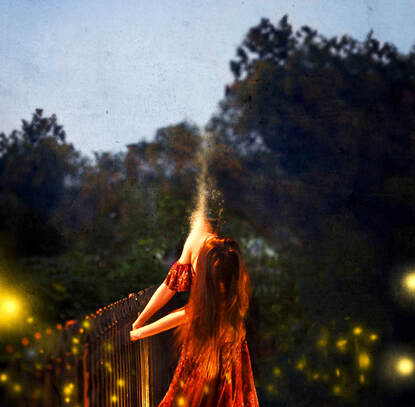 "Grave of the Fireflies" by Fiona Hsu

We break from imagery, hope, metaphor
under live oaks—
talk about the rain-slicked
black night &
distant summer thunder—
how it sounds like Jacob's laughter after poetry workshop.
Ryan says he likes the way cemetery light
shifts through this forest of ghosts.
Jacob says he lives in a small thicket three thousand
miles from here near Chengyang
Ryan says he would like to pay him a visit.
I say I like the way car lights from Lakemont
are bouncing off both of their faces.
Jacob says the thunder feels lonely
& more like a warning now.
Ryan says the antidote for a failing heart
is the same ingredient that makes bombs explode.

Yvonne Amey is a poet from Central Florida where she teaches college English. Her poetry, fiction, and nonfiction have appeared in Tin House, The Florida Review, Arc Poetry, and elsewhere. Her poetry has been nominated for two Pushcart prizes.
​Fiona Hsu was born in February of 2001 in Orange County, California. She has won first place in Yorba Linda Women’s Club art competition in 2019 with recognition from Congress, Senate, and Assembly, and she is a National Silver Medalist of Scholastic Art and Writing Awards 2019. Fiona is currently studying at UCLA as an undergraduate studio art major. Her works capture the aspects of beauty within woeful and melancholic definitions that narrate quaint and odd stories, in which she hopes her art serves as rusty mirrors for her audience—reflecting and reminding them of a quality and/or memory from the past.