“Don’t tell me the moon is shining; show me the glint of light on broken glass” is an oft-quoted remark ascribed to Anton Chekhov. One might argue that’s exactly the sentiment Julian Randall honors in his poem, “Freedom”: “look at my shadow / and say I didn’t put the moon to good use?” Another poem these lines echo is Lucille Clifton’s “homage to my hips”: “i have known them [her hips] / to put a spell on a man and / spin him like a top!” It’s crucial to draw these connections. After all, here’s Randall, taking that archetypal babe we call the moon, and putting an entire new spin on what the moon connotes. The moon “is a gaudy retreat,” Beyoncé’s voice behaves like a clingy mother, and the speaker’s shadow is given agency and a personality. What lends “Freedom” its freedom is ultimately its mixture of sleekness, vulnerability, and a “soft riot” texture: simple at the top, but, from the bottom, an underwater volcano already projecting an island. - Roy G. Guzmán.

but look at my shadow
and say I didn’t put the moon to good use? 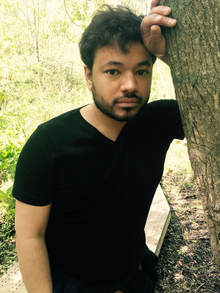 
​
Roy G. Guzmán was born in Honduras and raised in Miami, Florida. He received an MFA in creative writing from the University of Minnesota and is currently pursuing a PhD in Cultural Studies and Comparative Literature at the same institution. Roy is a 2017 Ruth Lilly and Dorothy Sargent Rosenberg Poetry Fellow and a Minnesota State Arts Board Initiative grant recipient. His work has appeared in the 2017 Best New Poets anthology, Poetry, Meridian, Juked, Jet Fuel Review, and Winter Tangerine. Roy’s debut collection will be published by Graywolf Press. Website: roygguzman.com. Twitter: @dreamingauze.