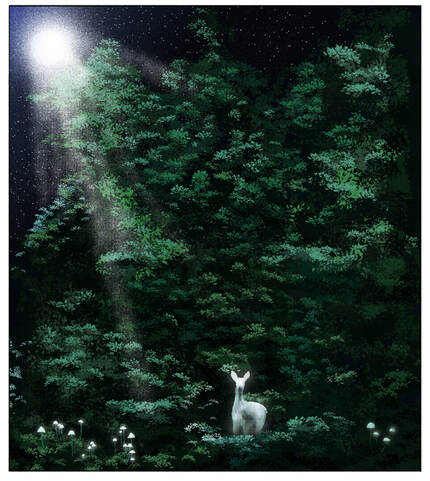 "In the Moonlight" by Kelly Emmrich

1. I feel nothing
sometimes,
with one shoe on as the afternoon sun
forms mathematics across the wall in white and gray,
passing from one silent age
to the next, your name
buried in a coffin somewhere within
me

2.  the feelings that begin to hedge away vision and time, rushing through morning streets
to one funeral home, then the next, an uncle, a grandfather, a friend, a March of rain and
death one after another so that a black suit begins to feel like skin, begins to box you in
like a coffin, soft silk and a pillow, accelerate through a red, park and breathe, the line of
those paying respects waits within, and down the street another, and up the highway a
hole in the damp earth to be filled and forgotten, but not forgotten, like a tree in a forest
you cannot see through a fog, a traffic light, another yellow turning red and a parking lot,
the watch on your wrist has stopped and you feel you will never be able to close the car
door, walk the black macadam to a room where now you stand among many, but one day,
​one day you’ll lie in wait, already gone, a sapling in a forest in the fog
Read more of James H Duncan's work in issues #34, #29, #20, #15, #6, and #3 of UtSQ.
James H Duncan is the editor of Hobo Camp Review and the author of Vacancy, Nights Without Rain, and We Are All Terminal But This Exit Is Mine, among other books. He currently resides in upstate New York and reviews indie bookshops at his blog, The Bookshop Hunter. For more, visit www.jameshduncan.com.
​Kelly Emmrich is an illustrator and animator living and working in the Blue Ridge Mountains. Her work has appeared in the magazines Moonhood Magazine, Dream Noir, and Meat for Tea. She studied creative writing and animation at the University of Mary Washington. She is currently working as a beer label designer for a microbrewery in Afton, Virginia and also as a freelance animator and illustrator.