The  Landing:  An  INterview  Series 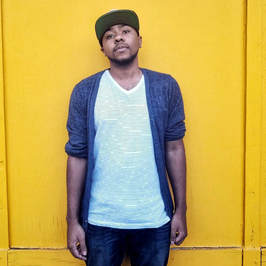 Cortney Lamar Charleston is the author of Telepathologies, selected by D.A. Powell for the 2016 Saturnalia Books Poetry Prize. He was awarded a 2017 Ruth Lilly and Dorothy Sargent Rosenberg Fellowship from the Poetry Foundation and he is also the recipient of fellowships from Cave Canem, The Conversation Literary Festival and the New Jersey State Council on the Arts. His poems have appeared in POETRY, New England Review, Gulf Coast, TriQuarterly, River Styx and elsewhere. He currently serves as Poetry Editor at The Rumpus.
Poem: “The Details Get a Little Fuzzy, I Apologize” by Cortney Lamar Charleston, published in HEArt Online.
This poem recalls witnessing the aftermath of violent recent events, utilizing the indirect lens of a news channel on TV. Was there one particular occurrence that brought forth this poem? What was your mental and/or emotional process for writing this piece?

As time moves away from the writing of the poem, I can’t recall what particular incident inspired it. Actually, odds are that it came during a season of very public deaths, murders, of black men, women and children, and this was what came from wrestling with the images, the ghosts. The poem itself is fixated on the way these incidents were depicted and discussed, weighed against other violent occurrences. I was interested in merging the disparate vocabularies, stripping away the political veils that differentiate how violence is spoken of depending on whom it is inflicted against; after all, violence is violence and, therefore, should be addressed with a common tongue of rebuke no matter its form, no matter what the victims look like, no matter who we are.

Of course, it goes without saying, there were many more events you could have made reference to in “The Details Get a Little Fuzzy, I Apologize”. How did you decide what to include and what to exclude?

True, the poem does sport quite the range. It makes allusions to 9/11, to the Boston Marathon bombing, to the DC Snipers, to Palestine, to the rape and sexual assault against women (which may in particular may have been immediately influenced by the transgression of Brock Turner). I honestly could have expanded and gone on and on, but it wasn’t necessary for the poem to do its job; I merely needed a few allusions to violent episodes such that the language could bind them together and the ones that ended up being included were, I think, the naturals based upon the way certain words in the poem was being transformed by associative thinking. Each word was slippery, and so I let my intuition guide me to the proper place until it felt time to turn the poem back inwards toward the speaker, which is always where it was meant to close.

Reading several of your published poems over the past few years, it is clear that your style and formatting is keenly aware of its subject, morphing, sometimes in drastic ways, to reflect the poem’s tone. Do you experiment a lot with format while writing, or are these shifts organic for you? How did you decide on your stylistic choices for “The Details Get a Little Fuzzy, I Apologize”?

Honestly, from poem to poem, the question about intention varies in its answer. At times, everything is very deliberate and others, it is more of an organic formation with less forethought. I think, in this particular case, I was committed to the title before anything else was written. I thought a bit about what a poem with that title looks like, or feels like more appropriately, and so it needed to have this element of transformation at the center. We all know what it feels like in our mind with the details of a memory are not sharp; we second-guess the things we do recall, fumbling over them, reinterpreting and reframing: that’s what this poem needed to feel like, and so as I wrote into the poem, I started keying on certain words or phrases that would then be reinterpreted or reframed to advance me to the next image or complication. That carried through until the end, until it felt right to close things up.

In a recent interview with Connotation Press you stated, “In using poetry to critique the normative functioning of our society as inherently violent or unequal or unfair, it is imperative that I invite readers into that moment of pre-determination as often and as well as I can, because it offers them a chance to reject the violence I’m critiquing and make a conscious decision in doing so.” How do you personally go about “inviting readers” into these moments of pre-determination? What advice do you have for those who seek to create poetry that responsibly reflects the injustice they see in the world?

I think how I go about inviting people into that moment of pre-determination also addresses the question about advice for poets seeking to tackle injustice through their writing. One thing that seems true, no matter the situation, is that our society has become so desensitized to violence, that violence is so casual and ordinary, we’ve forgotten it is personal in all aspects. People are killed, people are hurt. These people have stories, they have dreams, they have entire lives and they leave people who they love and who love them behind. At every turn, we must humanize, humanize, humanize: give us all the chance to really live in the dirty, despicable feeling such that we have no choice but to make sure nobody has to feel what we feel ever again. We only understand the stakes once our hearts have been touched repeatedly. And, as a side note, if you’re going to produce work that does this, make sure you’re exposing yourself to work you feel achieves this as well.
​Interview by Rhiannon Thorne and April Michelle Bratten.