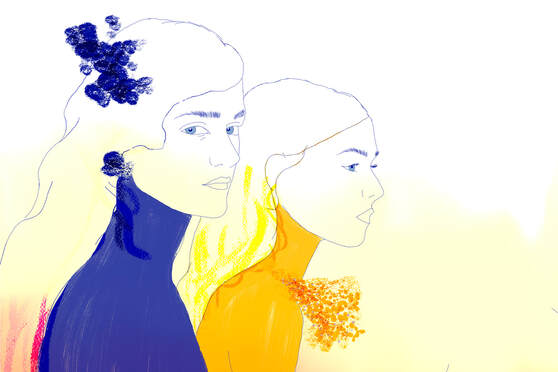 Weathering
​I grew up watching pine trees watch me, loyalty leaning
away from wind—kneeling only to give in. Never alone,

not then, as long as the trees stood near. Now: a woman
who won’t hold my hand, but begs me to stay in her bed;

she plies me with wine or whisky, knowing both tempt me.
I’m not convinced she sees me beyond curve of hip, reach

​of wrap. I walk away, reflect and find my pines: fatigued
by season, and like the woman, never noticed my absence.
Not the Sea Horses

The eye doctor laughs at me when I say
I see sea horses. He calls them floaters

his buddy had too much to drink:
that left eye would just start easing off

in another direction, oblivious to
anything that mattered. I wonder if

it’s something I got from my father:
the lazy eye, not the sea horses.

He, too, had a way of wandering off
trying to see more than he should—

getting caught up in the blur of it all.

Read more of Rachel Nix's work in issues #40, #34, #28, and #23 of UtSQ.
Rachel Nix is an editor for cahoodaloodaling, Hobo Camp Review and Screen Door Review. Her own work has appeared in Juke Joint, L'Éphémère Review, and Pidgeonholes. She resides in Northwest Alabama, where pine trees outnumber people rather nicely, and can be followed at @rachelnix_poet on Twitter.