The  Landing:  An  Interview  Series 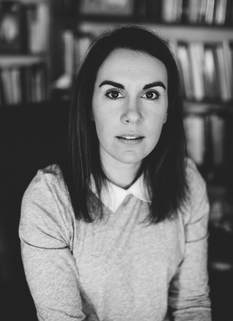 ​Rachel Mennies​ is the author of The Glad Hand of God Points Backwards, the 2014 winner of the Walt McDonald First-Book Prize in Poetry and finalist for a National Jewish Book Award, and the chapbook No Silence in the Fields. Mennies took over for Robert Fink in 2016 as the series editor of the Walt McDonald First-Book Prize in Poetry at Texas Tech University Press. She teaches writing at Carnegie Mellon University and is a member of AGNI’s editorial staff.
Poem: "The Glimmering Creature" by Rachel Mennies, published in Waxwing.


We’re always interested in poetic legacies. “The Glimmering Creature” is subtitled “after Anne Sexton.” On twitter you referred to this poem as “my circular love letter to Sexton & to a former self, still very close by”. In which ways did you write after Sexton, and in which ways for her?

Anytime I write explicitly about a woman’s sexual desire—and by explicit here, I mean “fully and clearly expressed or demonstrated,” rendering desire as both seen and reckoned—I’m indebted to Sexton. I feel like I write for her ongoing-ly. Her work gave me permission to follow threads I’d not previously understood, as a woman writer, as available for examination in poetry before I’d read her work: masturbation, pill-counting, unassigned and shifting lust. In that way, most of my work feels like it lives in her debt. I used after in the subtitle as a nod to the words I’d taken from her that’re placed directly in the sestina: the end-words in the first stanza nearly spell out at night, alone, I marry the bed, one of my favorite poetic lines of all time (from her poem “The Ballad of The Lonely Masturbator”). I made some subsequent tweaks as the phrase unfolds across the designated form-order, because Sexton’s phrase contains seven words (one too many for a sestina), and “at” and “the” are truly duds for the form, but the original phrase belongs to her. (More on that below!)

I’ve never accidentally or casually written a sestina—at least not well, which is why I rarely write them. (Does that count as poetry humor? Anyway…) The form requires more planning than I usually employ going into a first draft, so I began “The Glimmering Creature” by deciding to write a sestina in the first place, and then asking myself a few more times if I was sure I really wanted to write a sestina, and next I decided on my end-words, which I chose after re-reading “Ballad of the Lonely Masturbator” and knowing I had something to say about the relational forces of desire and alienation. The image patterns unfolded through drafting and revision. And a possibly embarrassing historical detail about the orange imagery in particular—I wrote a weird, lusty chapbook in high school called Oranges and Earth that I self-published and gave out to my friends after graduation. It was densely populated with fruit imagery. Since then, both oranges and peaches still seem to pop up every few years in my poems, and I’m not exactly sure why. But in meditating on the sensory experience of consuming a whole orange: there’s something about the way the fruit smells so intensely fragrant as you eat it, how the juice of a ripe one runs down the arm, and how the oil remains under the nails for hours after peeling it, that all feels powerfully, imagistically erotic—but also alienating, especially if you’re eating one alone. Like how you might smell a stranger’s body on a train, or in passing on the street, and realize they smell like someone you love, or used to love, or someone who no longer loves you. Their smell, too, stays in your nose all day.

The utilization of the sestina form seems to have taken this poem to an intriguing place it might not have gone otherwise, outside the bounds of form. What freedoms did the sestina allow while writing this poem? Were there any limitations?

The sestina form presents a writer with relatively few freedoms—but I love writing sestinas precisely for their prescriptive insistences. I did breach one of the form’s primary limitations by altering the end-words’ required pattern slightly, as I substituted a rotating list of words for the “the” in “[at, which I skipped] night, alone, I married the bed.” So the end-word pattern as established in stanza one became:
1.  night
2.  alone
3.  I / eye (another possible rule-bend)
4.  married/marry
5.  [WILD CARD WORD], which changed stanza to stanza
6.  bed

I abandoned the “the” because “the” pushes nothing further in a sestina: one might wish to make an argument that any grammatical sort of word could end a sestina’s line, but how could a poet possibly evolve or re-examine a definite article the way they might a noun? “The” felt like such an uninteresting place to end a line repeatedly. I also played a bit fast and loose with my envoi’s repetitions, which frankly might have come from pure fatigue… I tend to approach form interpretively and rarely adhere to a formal poem’s requirements entirely, but I usually abandon a chosen form mid-drafting if I find myself violating more than one or two of its constraints—because the limitations matter, too.

The freedom of the sestina form, for me, lies paradoxically in its forced recursion. Being required to repeat words in a prescribed pattern means the poem’s images and/or arguments must evolve in the poem, or else the sestina’s marriage of form and theme fails—and this frees the poet to imagine how else to inhabit those end-words, to turn the gears of each stanza cooperatively toward the poem’s conclusion and to unfold new ways of seeing as the energy that powers the poem.


What advice do you give to your students who wish to experiment with form poetry? What are good forms to begin with, and ultimately, how important do you believe it is to adhere to the form’s particular rules?

The poet R.A. Villanueva recently said to me on Twitter that a good form presents both a container and a dare. I love the idea that approaching a form as a writer means both honoring its “contained” expectations (or else why use it, in a world where most of us write in free verse?) and challenging, or daring, those expectations at the same time. When I assign forms to students, or when a student expresses an interest in experimenting with form, I usually begin with forms that have a precedent of interpretive approach—and for this, I especially like the sonnet. I personally recognize the volta as the sonnet’s hallmark more than its number of lines or its rhyme scheme. As long as the poem makes that wild turn towards its end, giving the reader new sight—that’s unquestionably a sonnet, even if it’s seventeen lines, or twelve. For most students new to form, I stay away from more elaborate forms like the sestina or the villanelle as a first-try form, because the dare, to borrow Villanueva’s insight for another moment, requires a bit more sophisticated labor to meet it, and formal frustration is very, very real.

When I write in form, which is admittedly not often, I “succeed” when I’ve married a thematic or imagistic preoccupation with a form that shares this preoccupation. I’ve written completely only two sestinas in my life (the first, “Inheritance,” appears in my book The Glad Hand of God Points Backwards), and each time I found a home in the sestina’s form because my preoccupation (grief in “Inheritance;” desire in “The Glimmering Creature”) had grown obsessive and looping in my head, just as the sestina’s end-words dare us to approach a subject. It’s important to ask how form and meaning relate in a poem: the sonnet volta’s power-arrow might not suit a more recurrent argument or image series in a poem the way a villanelle would, and a sestina insists an image or concept reappear, yet evolve in a space far too sprawling for a single pivot like a volta.

Lastly—we’re poets, right? Why not experiment? Why not dare?